A busy Restaurant Week for MW 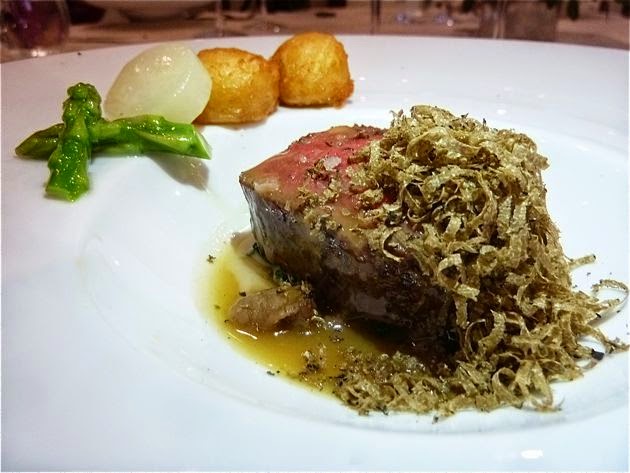 Nadine Kam photos
Washugyu ribeye with potato beignets, balsamic foie gras balsamic sauce and truffle grated at the table. I die. Served with 2009 Kenzo Estate “Ai (Indigo)” cabernet sauvignon, which was my favorite of the evening.

As if restaurant week is not busy enough at MW restaurant, Michelle Karr-Ueoka and Wade Ueoka—one of the hardest-working, over-achieving couples in the business—also hosted Kenzo wine dinners on Tuesday and Wednesday, which meant coming up with a completely different menu for the Kenzo Estate wine pairings.

Ok, so they didn’t exactly plan on serving three—if you count regular meal service—completely different menus over the two nights. Wade said the Kenzo Estate collaborative dinner had been planned long before they learned Restaurant Week would take place at the same time. 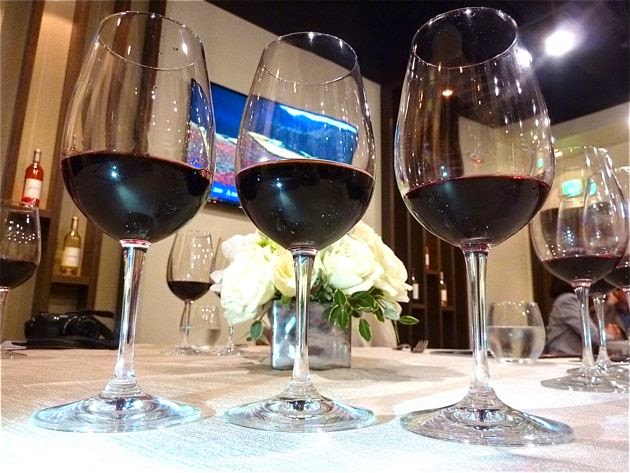 On top of that, there was the stress of making sure their special events dining room was completed for the occasion. I peeked in over the weekend and it still looked like a shell. But hey, I’ve seen many a miracle happen overnight in the retail world, and this was no different.

When this space was explained to me months ago, it sounded like it would be Wade’s own man cave allowing male patrons to enjoy ball games on big screens with manly food on the side. As a versatile special events room, it is perfect for intimate wine dinners and private parties, and no doubt its uses will continue to evolve as the couple sees fit. Watch this space!

And one more piece of news before launching into the dinner recap. They’re bringing back Baker Faire 10 a.m. to 1 p.m. Nov. 23, at Kakaako Agora, 441 Cooke St. (My post on the inaugural event is here: http://eatinhawaii.blogspot.com/2014/08/mw-part-i-bake-sale-seriously-upgraded.html )

They’ll also be introducing Collab Pie! One pie. Eight slices. One from each of the Baker Faire participants. These are in limited supply, so email marthac@gmail.com to reserve your $45 pie. Flavors are subject to change, but as of today the plan is: Canistel cheesecake pie, lilikoi chiffon, pumpkin, mac nut Koloa Rum, chocolate cream pie, ulu sweet potato, starfruit.

Back to the wine dinner. The menu was fabulous, showing another dimension to Wade’s talent in the kitchen. Where MW’s main menu tends to aim for a crowd-pleasing reinterpretation of tried and true local flavors, the dishes he came up with to pair with Kenzo Estate’s Asatsuyu, Rindo, Murasaki, Ai (“Indigo”) and Yui “Unity of all things”) wines were far more refined, with influences from Japan and beyond. A truly world-class meal.

Kenzo Estate was started by Kenzo Tsujimoto, whose claim to fame before becoming a vintner was founding Capcom, which developed such video games as “Mega Man,” “Street Fighter” and other hit game series. 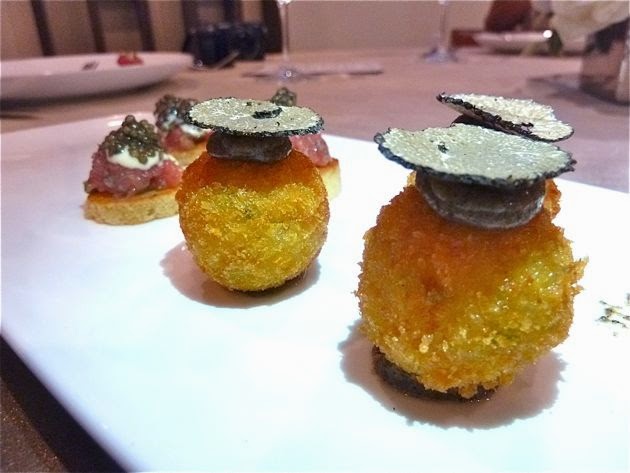 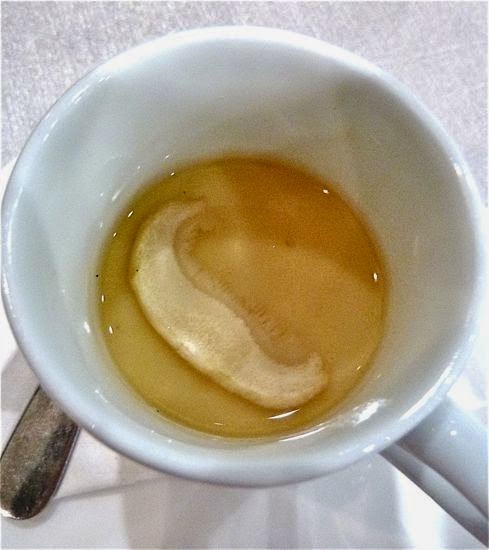 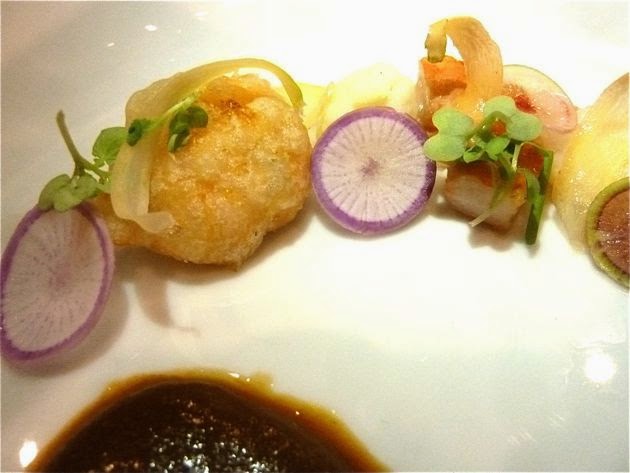 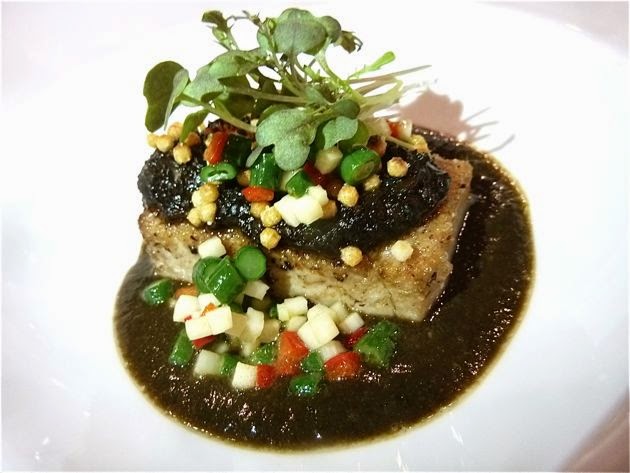 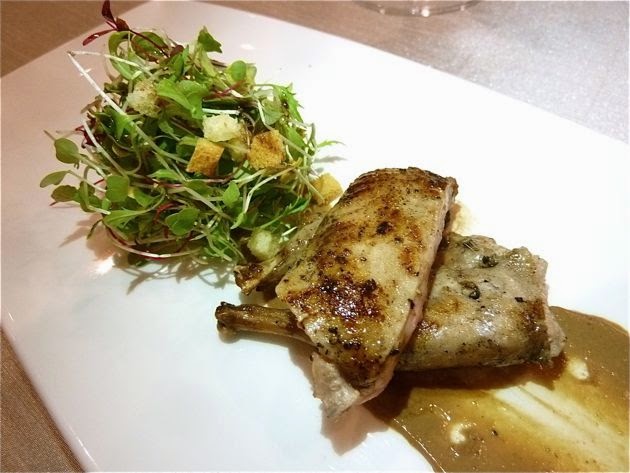 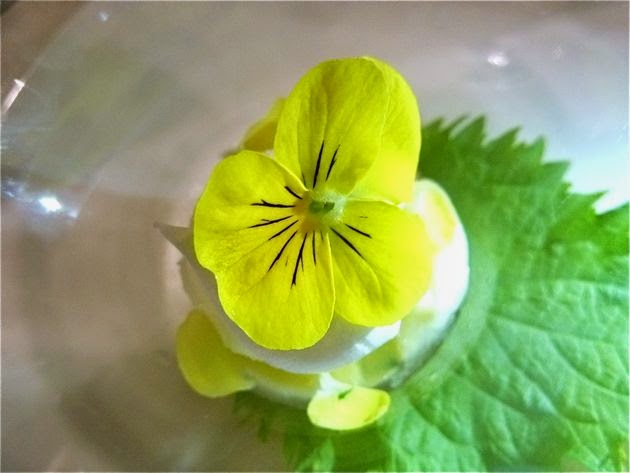 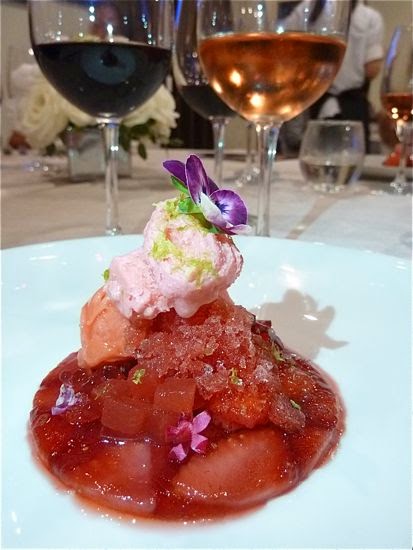 Michelle’s dessert of “Strawberry 5-ways,” which she said was really nine ways. But I couldn’t keep up beyond her compressed, frozen, aerated, shaved and pearl treatments. This was paired with 2013 Kenzo Estate “Yui (Unity in all Things)” rosé. 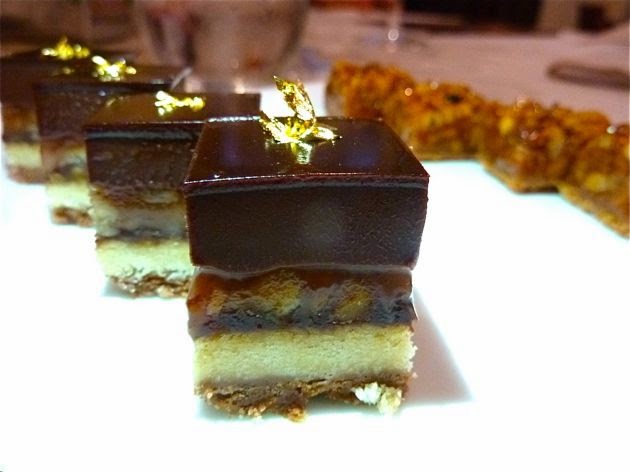 Of course the couple could not let people leave without a sweet finale of mignardises and take-home chocolate chip cookies. 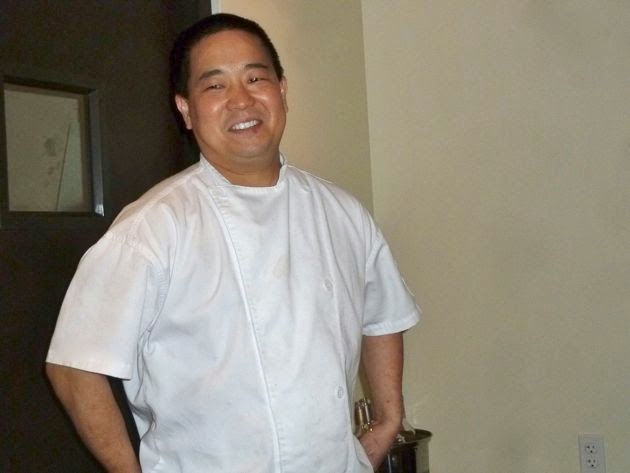 Chef Wade Ueoka thanked his staff and diners after the meal, but we were probably the more grateful.
Posted by Nadine Kam at 1:29 AM