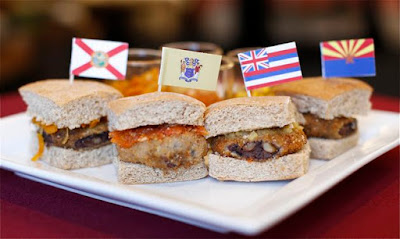 Proceedings on Capitol Hill can be dry, but the inaugural Congressional Veggie Burger Smackdown that took place yesterday brought some levity to the serious subject of the correlation between food and health.

The nonprofit Physicians Committee teamed up with the bipartisan Vegetarian Caucus to host the smackdown for Hill staffers looking for a healthful alternative to the North American Meat Institute’s annual Hot Dog Lunch that took place the same day, just ahead of today, designated National Hot Dog Day. 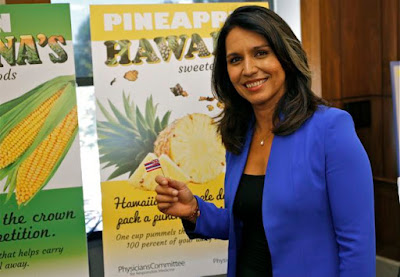 Chef Gray found inspiration in the state’s fruits and vegetables, including the pineapple for his Hawaii burger, created in honor of Rep. Tulsi Gabbard.

The FLOTUS burger comprises a mix of mushrooms, black beans and quinoa. It is a veggie version of chef Spike Mendelsohn’s Prez Obama Burgers. Members of Congress and their staff were able to sample the FLOTUS burgers and vote on their favorite sauce.

Noting that personalities like Beyoncé and former president Bill Clinton dramatically improved their health by opting for vegetarian fare, the Physicians Committee wants to extend this trend by calling attention to other individuals who embrace a plant-based diet, and showing that healthful foods can taste delicious. 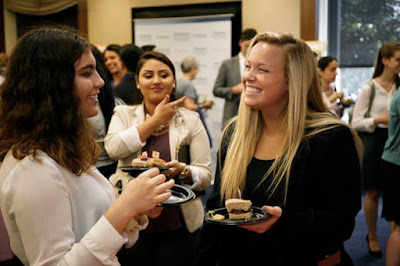 The event was staged to provide a healthier alternative to the annual American Meat Institute Hot Dog Lunch that took place the same day. 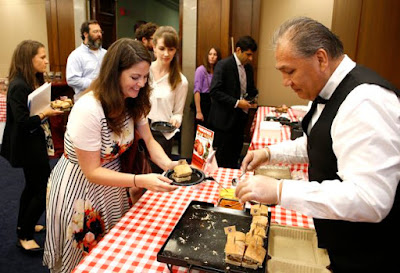 The physicians group also wanted to educate attendees about the dangers of hot dogs and other processed meats, warning that studies show that processed meats are linked to cardiovascular disease and diabetes, and that ingestimg hot dogs, bacon and sausage may increase colorectal cancer by 21 percent.

A panel of America’s top nutrition experts recently warned against processed meat products and encouraged the U.S. government to exclude them from the 2015 Dietary Guidelines for Americans. The panel also found that 89 percent of Americans fall short on daily vegetable consumption.

While Democrats and Republicans rarely see eye to eye, Neal Barnard, M.D., Physicians Committee president, said in a press release statement: “I think both sides of the aisle can agree that fruits and veggies should replace disease-causing hot dogs on Capitol Hill and in the American diet.

“It’s never too early or too late to plant the seed about foods that have the power to transform your health, and in many cases, transform your life.”

The Physicians Committee was founded in 1985, and comprises more than 12,000 doctor members. The organization promotes preventive medicine, conducts clinical research, and encourages higher standards for ethics and effectiveness in research. 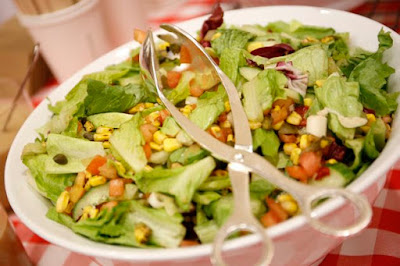 A salad and fruit kebabs accompanied the vegan FLOTUS burger. 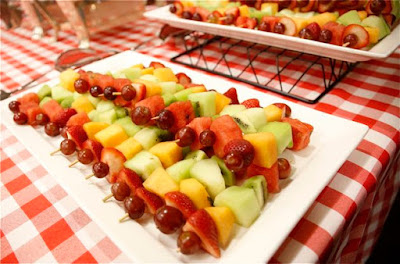 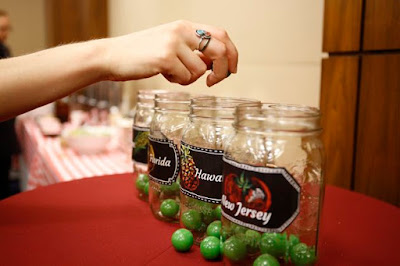 Votes for the best sauce were cast with marbles, with Hawaii’s pineapple burger taking second place.

Here is the recipe for both burger and pineapple topping:

Transfer the mixture to a food processor. Add the black beans, quinoa, oats, and 1/2 cup of the panko; pulse to a coarse-paste consistency, then transfer to a mixing bowl. Season lightly with salt and pepper; stir to incorporate. Cover and refrigerate for at least 1 hour, and up to 1 day.

Whisk together the egg replacer and water in a medium bowl.

When ready to cook, form the chilled burger mixture into 4 equal-size patties. Spread the remaining 1-1/2 cups of panko on a plate. Whisk together the egg-replacer and water in a medium bowl to form a smooth slurry.

Briefly dip each patty into the egg replacer slurry so it’s coated on both sides, then gently press into the panko until evenly coated on all sides. (Discard excess slurry and panko.)

Heat a medium cast-iron skillet over medium heat. Generously grease with cooking oil spray, then add the burgers. Cook about 5 minutes on each side, reducing the heat as needed to avoid scorching, until a nicely browned crust forms. Use more cooking oil spray as needed-including on the burgers themselves-to keep the burgers from sticking or becoming too dry.

Place the burgers on the bottom buns. Top each burger with equal portions of your favorite sauce and condiments. Makes 5 servings.

———
Nadine Kam is Style Editor and staff restaurant critic at the Honolulu Star-Advertiser; her coverage is in print on Wednesdays and Thursdays. Contact her via email at nkam@staradvertiser.com and follow her on Twitter, Instagram and Rebel Mouse.
Posted by Nadine Kam at 5:29 PM