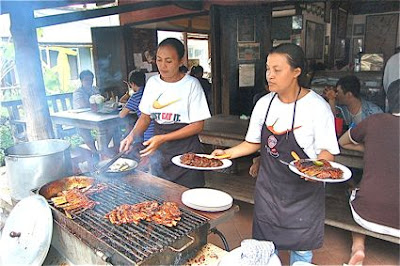 UBUD, BALI, INDONESIA — If you are meat-inclined in Bali, chances are you will be eating pork or chicken. Beef is too costly to raise, and even in non-resort areas you will pay Western prices of about $14 a plate for it, whereas a pork or chicken plate can be had for about $30,000 to $35,000 rupiah. Before you get scare, that's about $2.60 to $3. Yeah, I went over with about $2 million in rupiah, about $200.

The Balinese people are very entrepreneurial because they still live the kind of sensible village lifestyle in which every home had its specialty, and every family compound—typically with several cottages to house everyone in the family—has a shop, or warung, in front, to peddle its wares, whether food, clothing, jewelry, laundry service, baskets or sundries. You could just walk from neighbor to neighbor to pick up everything you need.

So, many of the restaurants are still in family compounds, such as Warung Babi Guling Ibu Oka is known for its pork, but you'd think it was chicken from all the clucking and crowing going on here, a result of another money-making family enterprise, raising fighting cocks. ("Ibu" means "woman" or "matriarch" and "oka" is the first son.)

If Naughty Nuri's Warung seems more Westernized than most, it was started by New Yorker Brian Aldinger and his Javanese wife Isnuri Suryatmi, and evolved along with the Australian tourist market to offer "Wicked Ribs" and "Brutal Martinis." Aldinger died last September, but was a fixture at the Ubud restaurant, and chalkboard messages at the restaurant still read, "We love U Brian."

Nuri's specializes in barbecue, with a delicious sweet sauce utilizing the regional palm sugar, which is less sweet and mellower than the cane sugar we use. I think it's great and wish it were used here.

In the U.S., we don't like to think of where our food comes from, but at Nuri's, the pig farm is still in the back of the original Nuri's and they go through about 300 pounds of pork a day. 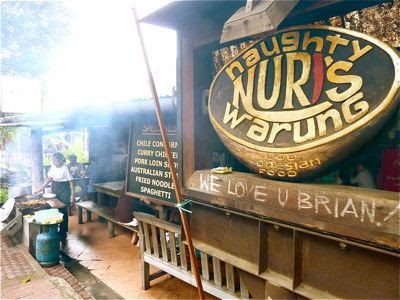 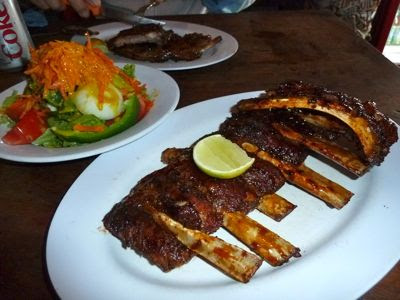 These ribs are about $3 at Naughty Nuri's in Ubud, Bali. 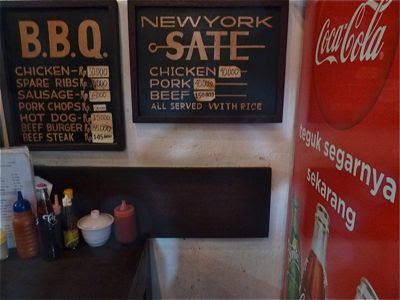 Part of the menu at Naughty Nuri's. 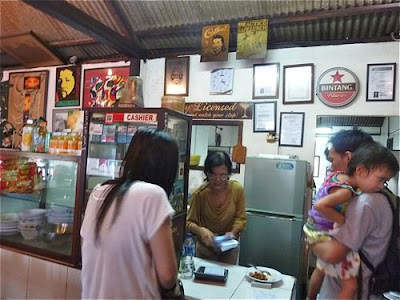 Signs around Naughty Nuri's in Ubud look like they come from an old-fashioned 1950's American diner. 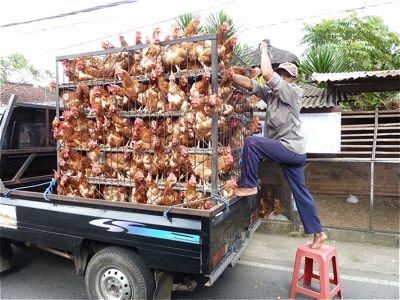 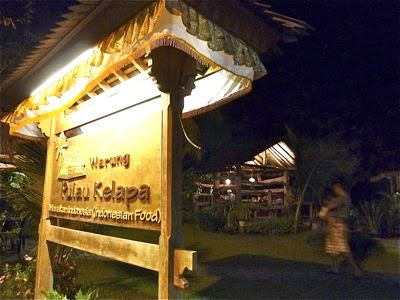 The Indonesian restaurant Warung Pulau Kelapa is set in a Dutch-style wood home. The dining structure in the background is an old ox pen. 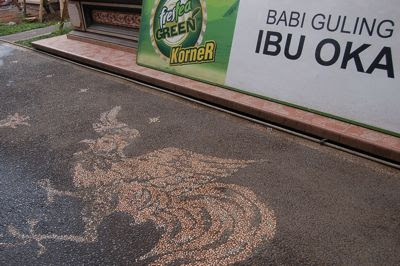 "Babi Guling" refers to the suckling pig that is a specialty at Ibu Oka, but they're big on raising fighting chickens. 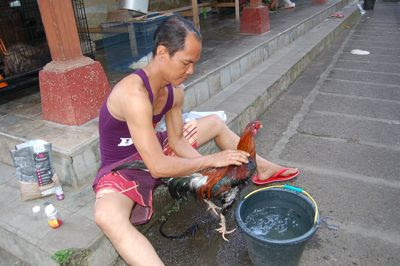 At the Ibu Oka family compound, this gentleman bathes one of his prize fighting cocks. Toward the left are the bird's medicines. 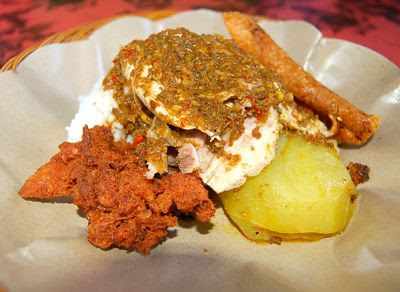 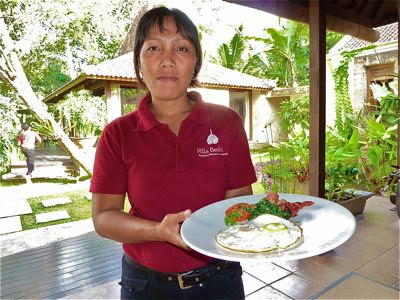 Villa Bodhi chef Wayan with the American breakfast I requested on the last morning of my visit. The sausage is cut like a tuberose. 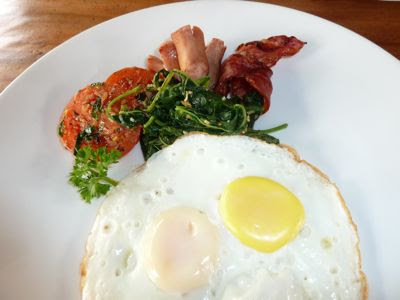 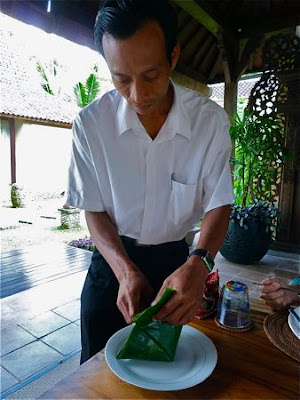 Villa Bodhi manager Made Sukadana opens a packet of bubur, in a "to-go" banana leaf wrapper. It's the Balinese equivalent of Hawaiian laulau wrapped in luau leaf, or Chinese joong wrapped in lotus leaf. This is sold in a warung outside Villa Bodhi for 2,000 rupiah, roughly USD.16 cents. 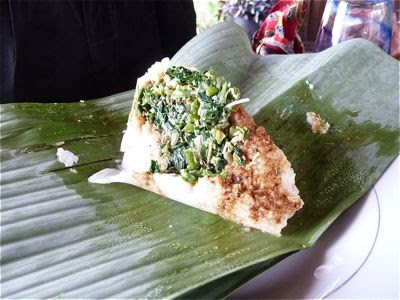 This particular, highly cravable bubur comprises rice steamed with vegetables and a spicy sauce, but there are many variations, such as the bubur ayam mentioned in my previous post, a chicken porridge.
Posted by Nadine Kam at 11:06 PM