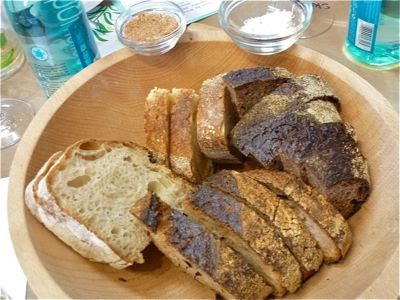 Cook Space Hawaii was host to chef Lance Kosaka and Chris Sy for a combination demo/dinner exploring the life of bread. That is, how to enjoy bread as it runs its course from hot-out-of-the-oven fresh-baked form, to slightly stale to hard as rock state, the idea being that while in Asian cultures every grain of rice is considered precious, in bread-eating cultures diners would never dream of wasting a single crumb.

The event was part of the new demonstration space's summer cooking series "Get Fresh LIVE," demonstrating the alchemy that takes place when chefs and food producers are able to work together and inspire one another. The chefs are allowed to pick their collaborator. While other chefs in the series have chosen to partner with the farmers, Kosaka, executive chef of the Skybar, coming next spring, chose Breadshop's Sy, because he's found that most people don't know what to do with bread beyond making sandwiches or buttering it up as a pre-dinner ritual. Throughout Europe, bread is enjoyed throughout the meal.

Sy, who holds a Bachelor of Arts degree in English Literature from the University of Chicago, said he was inspired to start experimenting with baking bread after reading an essay on bread in "The Man Who Ate Everything," by Vogue magazine food critic Jeffrey Steingarten. 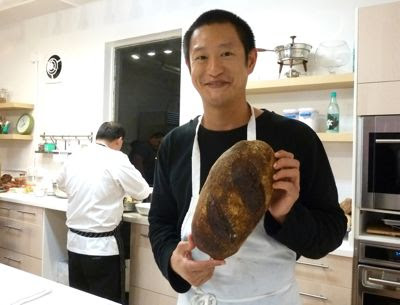 Chris Sy with a loaf of his pumpernickel. He's worked in kitchens from the Chicago Area's Trio, to New York's Cru, Aux Vieux Four in France, and The French Laundry. He returned home and worked at Chef Mavro and Town before starting his craft bakery Breadshop.

Throughout the meal, I kept thinking about how my late husband would have loved every minute of this dinner.
His mother was from Belgium so he was raised in the Old World European tradition of setting the table with French loaves, cheeses, crêpes, leek quiches and savory stews. In all the time I knew him, he was never without the basic pleasures of the table, and life—a baguette, bottle of wine and cheese.

Sadly for him, until Sy came along, Oahu never had decent bread. Sy talked about the high temperature and moisture needed to achieve the combination of chewy, toothy interior and crackly crust. He uses a pizza oven and said that to produce such bread takes eight to 16 hours, a commitment most restaurants cannot afford, which is why we get lifeless generic table bread and why so many connoisseurs line up at the Pig & the Lady at Farmer's Markets for Sy's creations. 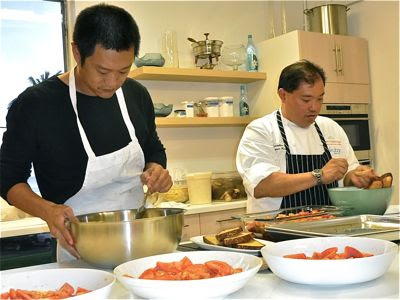 Sy and chef Lance Kosaka work on the bread and tomato salad. 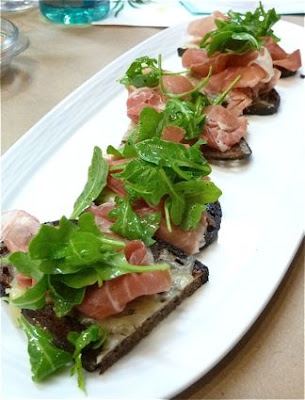 Open-faced grilled cheese canapes start with grilled cheese of compté and gruyère over Sy's pumpernickel, topped with arugula and prosciutto for a tasty appetizer that's easy to duplicate the next time you entertain. 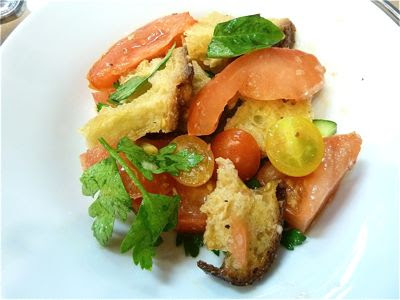 Kosaka explained the Tuscan panzanella salad is no more than deconstructed bruschetta, with the a couple days-old bread softened by the blend of olive oil and tomato juices, and tossed with basil and Italian parsley. Sprinkle the tomatoes with salt and allow them to sit for a while to coax the juices out. 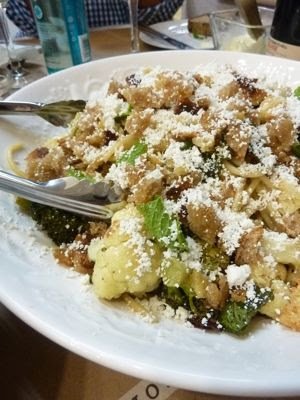 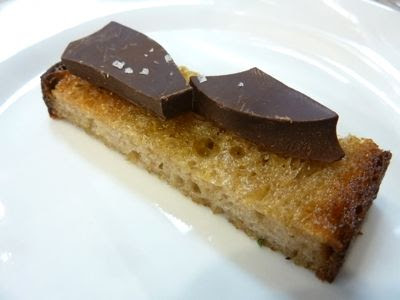 Olive-oil pan-fried bread topped with Madre chocolate for dessert, with a light sprinkling of salt. So wonderful! 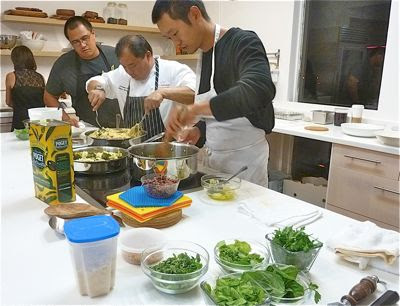 Lance and Chris toss the pasta. In the foreground are some of the fresh greens that went into the meal. 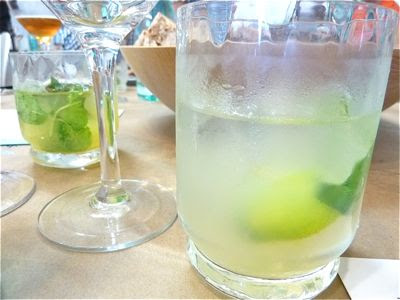 Guests were greeted with a choice of mango or calamansi coolers from Cheryl To of PacifiKool, known for its ginger libations.
Posted by Nadine Kam at 3:12 PM