Thanksgiving made easy at Whole Foods 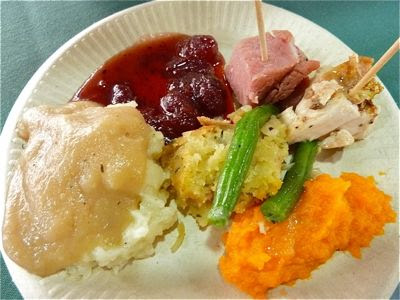 Nadine Kam photos
Thanksgiving came early to Whole Foods Kailua, which hosted a Holiday Tasting event yesterday, for those who needed a reminder that the holiday is next week! On the plate: mashed potatoes and gravy, stuffing, autumn puree, cranberry sauce, ham, turkey and green beans.

Whole Foods Market Kailua hosted a holiday tasting event on Nov. 12, bringing early cheer to revelers hoping to pick up entertaining tips while sampling some of its organic, family-farmed turkeys and all the trimmings. And of course, reminding those who have not begun to plan the holiday meal, that they're there to help.

Several departments offered entree and side dish ideas to suit every entertainment style, whether you prefer large gatherings or a party of two, or whether you prefer a lavish D.I.Y. dinner, or just want to dash in and pick up a packaged meal or sides such as seafood from its poke bar, or hot artichoke and surimi, or crab dip to go.

Those who want to cook their own bird will find all-natural, organic and heirloom turkeys, starting at $2.79 per pound.

Prepared meals including turkey and vegetarian options start at $10.99, per person. One such dinner for six features a Diestel Ranch roast turkey (10 to 12 pounds), 48 ounces of stuffing, 24 ounces of gravy, 60 ounces of mashed potatoes and 16 ounces of cranberry sauce, for $99. Pick up just the sides for $49. Or whole roasted turkey alone for $6.99 ($9.99 for organic).

For the same price, a ham dinner for six features a seven-pound spiral-cut, bone-in ham with glaze, 56 ounces of scalloped potatoes, 40 ounces of green bean almondine, and 32 ounces of autumn puree (butternut squash, carrots and yams).

There are many options, so you don't have to feel forlorn or hopeless if you simply run out of time or energy to put a meal on the table between now and January.

You can also order an assortment of sushi, cheese and antipasto, chicken wing, fruit and veggie, and hors d'oeuvres platters online at: http://www.wholefoodsmarket.com/online-ordering Or simply call the store at least 24 hours in advance, at 263-6800, before heading out to the store at 629 Kailua Road. If you're closer to the Kahala Mall store, call 738 -0820. 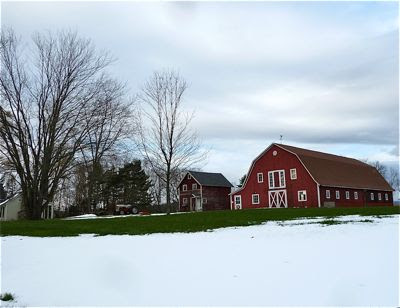 I just got back from the snow in Connecticut, where all the fixings of a heavy Thanksgiving meal really make sense. 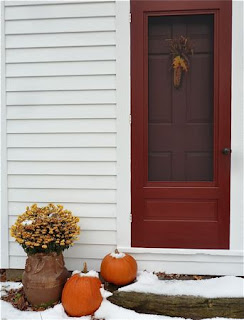 In giving thanks for what we have, Whole Foods also reminds customers to think of those struggling to attain basic needs. Its Grab & Give program gives individuals an easy way to make an impact. Through Dec. 31, 2012, shoppers at the Kahala, Kailua, and Kahului stores can purchase and donate meals and other essentials for distribution via Aloha Harvest on Oahu and Ka Hale A Ke Ola Homeless Resource Center on Maui.

Shoppers can also opt to make a donation of $5, $10, $25 or more, to provide a full meal for a family of four, including healthy options from Whole Foods Market's 365 Everyday Value line of products. A $5 donation provides a family with breakfast of organic oatmeal and cereal bars, while a $10 donation offers a lunch of macaroni and cheese, tuna, creamy peanut butter, crackers, and fruit spread. Dinner is also a $10 donation and includes two packages of spaghetti, pasta sauce, a six-pack of apple sauce, a can of soup, and a can of vegetables. With a generous $25 donation, shoppers can provide an entire family with a full day of meals.

Since the Grab & Give program launched in 2007, the program has raised more than $3.6 million, which has helped feed more than 435,000 families with an average of four members. 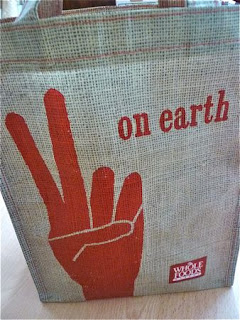 The spirit of the holidays reflected in one of Whole Foods reusable bags. It looks like burlap, but that's just the print on the usual recycled material. 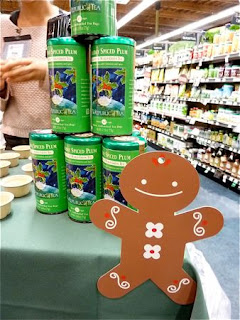 Holiday Spiced Plum tea from the Republic of Tea. 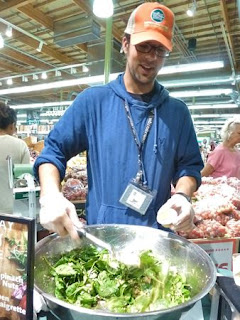 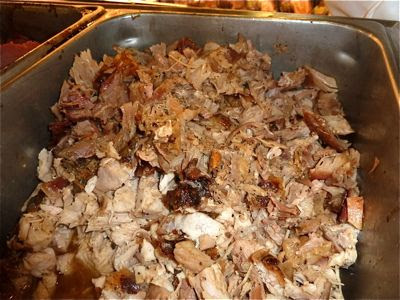 The 12-pound turkey was prepared with an easy recipe: Salt and pepper the outside of the bird, sprinkle rosemary in the cavity. Place whole bird in a 1/4th inch of water in a metal pan. Roast at 375 degrees F. for 3-1/2 hours. Done and deliciously moist! 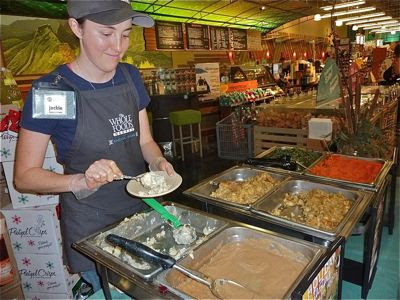 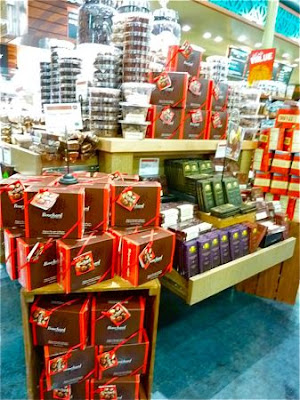 Chocolate in multiple forms, ready for gift giving, or as pistoles for baking. 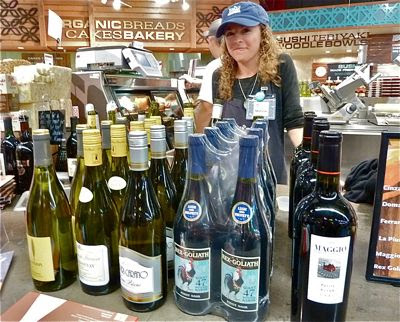 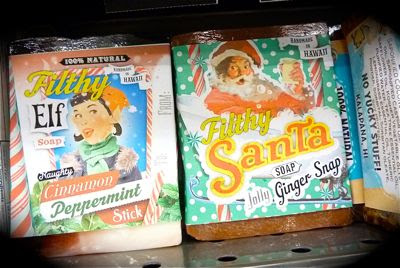 Clean up with Filthy Farmgirl soaps, available in holiday scents and packaging, and note the most important ingredient at far right, "No yucky stuff!"
Posted by Nadine Kam at 6:27 PM