Celebrating 'Made in America' Hawaii-style 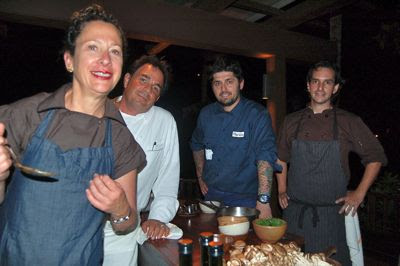 Some of Los Angeles' top chefs were in the house at the Four Seasons Resort Hualalai for "Made in America 2," five days of cooking classes, a farm tour, a fishing trip and sumptuous meals that took place March 1 through 5.

I was able to fly over to the Big Island for the chef's dinner March 3 at the Beach Tree restaurant, bringing together the talents of Nancy Silverton (Osteria Mozza, Pizzeria Mozza, La Brea Bakery), Matt Molina (executive chef of Osteria Mozza and Pizzeria Mozza), Ludo and Krissy Lefebvre (LudoBites) and Josiah Citrin (Mélisse, Lemon Moon Café).

Each of the chefs is featured in Lucy Lean's cookbook, "Made in America: Our Best Chefs Reinvent Comfort Food," published last fall, which showcases America's classic comfort food dishes as reinvented by 100 of today's top chefs from across the nation. Recipes by the Four Seasons Resort Hualalai executive chef James Babian and pastry chef Linda Rodriguez appeared in the cookbook, so the resort invited Lean back for "Made in America" celebration once the book was published. "MIA2" revisited the work, this time with more of Lean's chef friends to keep her company.

Considering the star power, I thought the various dinners were very reasonably priced at $69 to $99 per person with wine pairings by Master Sommelier Chuck Furuya.

Josiah Citrin had another reason to be in Hawaii, checking in on his new burger shack, Sure Thing Burger, in Lahaina. He's trying to get me to go over and try it, which is tempting, given that it's getting mostly 5-star ratings on Yelp, mostly from out-of-towners who have no clue as to the star power behind it.

He says he'll be on Oahu in September, for Roy Yamaguchi and Alan Wong's Hawaii Food and Wine Festival, an event that is more than doubling its size in its second year, to 50 chefs! Can't wait for that! 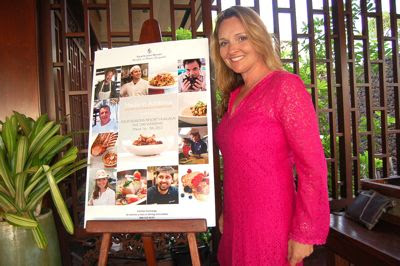 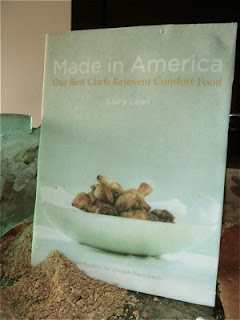 As nice as it would be to have such a gathering on Oahu, the setting was fabulous and the intimacy allowed for great exchange between chefs and foodie fans.

The resort strives to be a culinary destination, and one fan, Greg Hartman of San Francisco, shared his love of the resort, saying that just a few years ago, it was "hollow."

Things changed, he said, with the opening of the Beach Tree on manager Chuck Wilson's birthday in August of 2009. "It transformed the whole resort," Hartman said.

Chef de cuisine Nick Mastrascusa describes the Beach Tree as the piko of the property, the gathering place where people congregate to relax and enjoy the beautiful sunsets.

Formerly with the Four Seasons New York, Mastrascusa arrived at the same time as Wilson, and when he left New York, his peers teased, "What are you going to be doing there? Opening coconuts and serving food in them? Serving them with pineapple?

Far from it. The food certainly gives area farmers and ranchers their due, utilizing 75 percent local ingredients, but without a ticky-tacky tourist dish in sight. 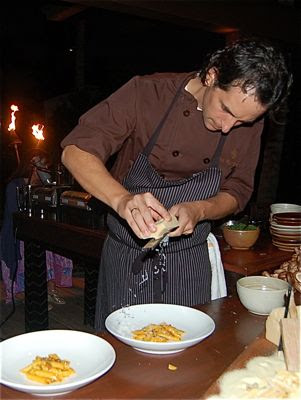 Nick Mastrascusa grates cheese over the Garganelli with Ragu Bolognese cooked up on the spot by Nancy Silverton and Matt Molina. 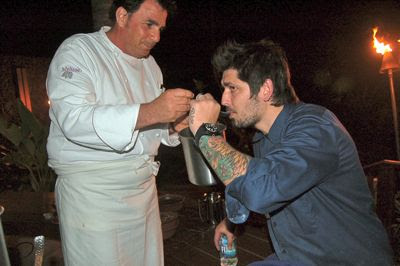 Citrin offers Lefebvre a taste of one of his creations. 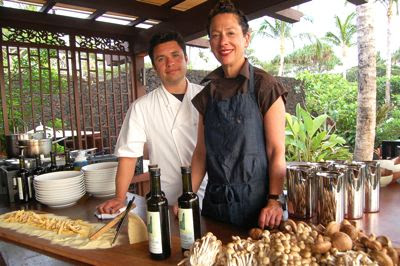 Silverton and Matt Molina set up before the dinner rush. 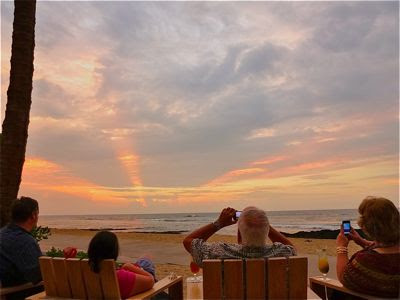 The setting, just beyond the Beach Tree restaurant, were beach and sunset. 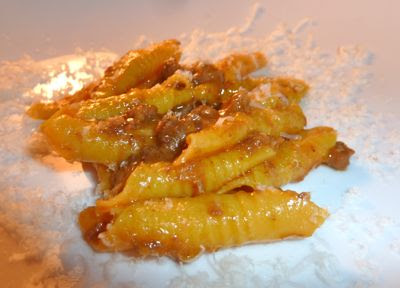 Second course: Garganelli with Ragu Bolognese, the creation of Mario Batali, Nancy Silverton and Matt Molina of Osteria Mozza in L.A. The texture of the pasta was fabulous, striking a balance between chewiness and resistance. I could have eaten four times as much of it. Very simple, and though it's hard to pick a favorite when every dish is great, this hit the spot for comfort food. 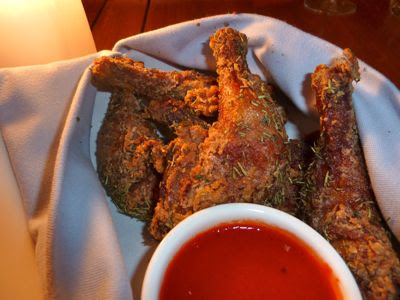 Third course: Ludo Lefebvre's Duck Fat-Fried Chicken with spicy piquillo ketchup came in two baskets, one of chicken legs and one of boneless chicken breasts for those who didn't want to get their hands dirty. It offered a light delicate crisp and the perfume herbes de Provence, most prominently rosemary and thyme. 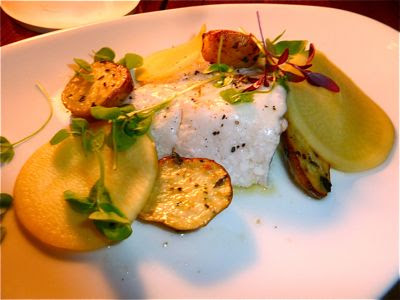 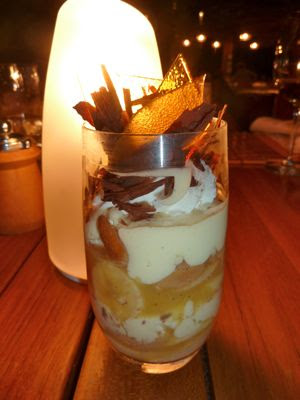 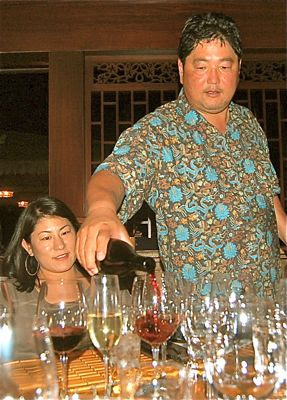