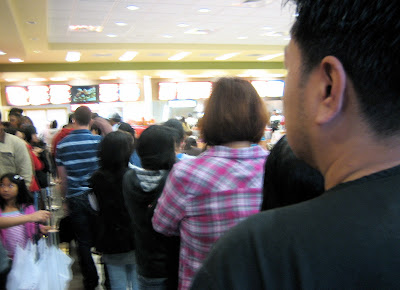 Nadine Kam photos
The line was 60 people deep on a rainy Sunday at Jollibee's Waipahu, Hawaii, site during opening week, on Dec. 19, 2010.

Now we know that neither rain nor flooding nor fear of crowds will keep diners away from Jollibee.
The new Philippines-based fast-food restaurant opened in Waipahu last week and drew lines from Day One.

I knew it would be especially crowded over the weekend when families could get together, but I took the chance of going early Sunday, hoping that all good Catholics were in church. Or Christmas shopping.
They weren’t. They were feasting on fried chicken, palabok and spaghetti, the mainstays of Jollibee’s American-style menu.

For work, I had risked my life in pouring rain and whiteout freeway conditions to be there. I would’ve preferred to stay warm and comfortable at home. Common sense would tell people to stay home and not risk an accident or getting in the way of cleanup crews. But the drive for food is primal, made all the more strong by the drive for entertainment and novelty. A trio of lines, 60 people in all, awaited when I got there for lunch at about 10:30 a.m. When I left, there were another 60 people inside and even more waiting in line outside to get in. 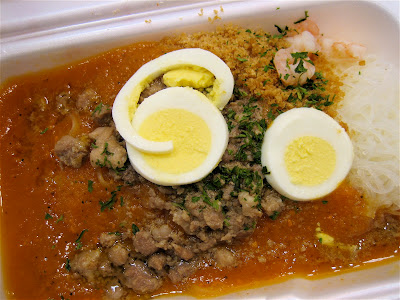 I didn’t time the wait because it would have just made me sad to think how much of my life was wasted in line. I just tried to stay calm, and the lines did move fairly quickly. I was already eating at 11:15, so figured I had made it up to the counter in about 20 minutes, and had food in hand in another 10.

Near the head of the line, there was a person assigned to write down orders so that by the time I got to the counter, all I had to do was hand over the slip of paper with my order. Having been in business for a while, each option is numbered for ease.

At first, I didn’t think it was helpful that the person taking the order wasn’t able to call in the orders, but just writing it down forces people to be decisive and not waste time studying the menu only when they got up to the counter. Everything is premade and packed to go, so the person at the counter simply had to grab and stack orders.

That is often no easy task, considering there were a lot of families with numerous orders. Right next to me was a woman walking out with about four entrees and a bag of 10 burgers. If you can’t carry a tray stacked with plates, burgers, drinks and cups of halo-halo, they’ll call for an assist, someone to carry your tray for you, which is above and beyond what I’ve seen at any other fast-food operation. The young, novice staffers deserve kudos for keeping the operations running smoothly from the start.

The company has had a lot of practice in perfecting its system, having started in 1975 as an ice cream parlor. And although many Asia-based businesses make Hawaii their first stop when heading West, with no language or culinary barriers to break down, there are already 26 Jollibee restaurants from California to Queens, N.Y. 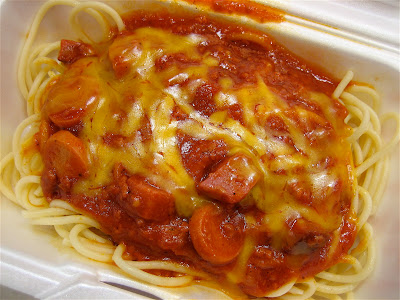 THE FRIED CHICKEN, dubbed “Chickenjoy” here, is crisp on the outside and juicy throughout. It’s the star of the menu, available on one-, two-, or three-piece plates in combination with one side and a soda ($5.99) or two sides and a soda ($8.99). Those side options are steamed rice, instant mashed potatoes, french fries, macaroni salad or buttered corn. You can also get a single piece of Chickenjoy in combination with spaghetti ($6.75) or palabok ($7.75).

The palabok is one of a handful of nods to the restaurant’s Philippine heritage. It’s only for those who aren’t averse to the smell of seafood. It’s a pancit dish in which the rice noodles are layered with an orange garlic-fish sauce, a handful of bay shrimp, a couple of boiled egg slices and a sprinkling of crushed pork rinds. I liked it a lot, but it will be an acquired taste for many.

More timid diners might want to stick to the hamburgers, from a basic cheeseburger ($1.09, $3.09 with fries and a soda) to the “Amazing Aloha” ($4.95/$6.95) topped with bacon, pineapple, lettuce, cheese and a honey-dijon sauce. The beef patty is nothing special, leaving the heavy labor to the toppings to convince you it’s delicious.

The spaghetti can only be described as child-friendly, having more in common with Chef Boyardee than any Italian restaurant. For one thing, the tomato sauce is saturated with sugar, then it’s dotted with thin slices of hot dogs and sausage.

Because of the lines, you’ll have to order dessert at the same time as the rest of your meal. These include Peach Mango Pies ($1.99 each) that are a ringer for McDonald’s-style pies, with more canned cling peach than mango flavor.

There’s also halo-halo ($3.99) topped with a cube of leche flan and two small scoops of ube (purple yam) and langka (jackfruit) ice cream. You don’t have to worry about the ice cream melting while you finish your entrees because a thick layer of shaved ice is enough to keep it chilled. At the bottom of the cup is an array of sweet treats including mung, azuki and white beans, and fruit gelatins. It’s another menu highlight.
———
Nadine Kam’s restaurant reviews are conducted anonymously and paid for by the Star-Advertiser. E-mail nkam@staradvertiser.com.
Posted by Nadine Kam at 1:30 AM