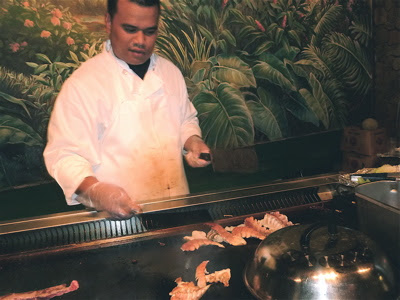 I like the option of dining at a Hello Kitty/Sanrio restaurant, but the first couple of forays leave me feeling like Goldilocks in the Three Bears story.

The first Hello Kitty Cafe in Pearlridge Center, essentially a dessert counter, was too small.
The second, the recently opened Makittii Hawaii Japanese Seafood Buffet, is more Papa Bear than girly size. Maybe the next will be just right in appealing to women and girls, the core Sanrio fans.
Very young girls might be taken by the Hello Kitty murals in back that make a nice backdrop for birthday parties, as well as the small gift shop in front of the restaurant.
It was smart of Makittii owner Toru Makino, of Makino Chaya fame, to try to differentiate this buffet from his other establishments, but then Makittii doesn't go far enough with the theme. Save for some delightful, colorful desserts at the end of the meal, there's little in the buffet or about the setting in general that makes me think I've entered a joyful fantasy world. The plantation-style ambience is much the same as it was when it housed another buffet operation, Perry's Smorgy.
Anyone planning another Sanrio restaurant in the future should look to Disney and Q-pot for inspiration in everything from candy- or ice cream-shop decor and cute uniforms to match, to hiring staffers full of bubbly charm.
Considering what I imagine to be a childlike effervescence and aura of Ms. Kitty and crew, I found the experience rather gloomy due to servers just doing a job, without having sipped Kitty's shiny, happy Kool-Aid. In fact, when in the absence of adequate help I tried to get a glass of water myself, I was chided for doing so.
When I first hit the evening buffet, I felt there was no way I could eat $30 worth of food. There are so many options you'd be full after sampling just a bite of perhaps one-tenth of dishes offered. It doesn't help that I don't have the buffet mentality of going for the most expensive food. I just go for what I like, so when I scooped a hard-boiled egg out of the oden, my guest didn't think that was very smart, warning, "It'll just fill you up." Sorry, I just like boiled eggs. 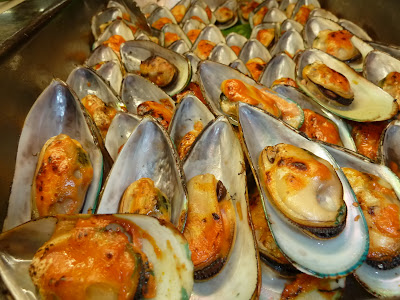 Mussels are a little dry, but still one of the best items on the buffet.
This was before I discovered a chef grilling steak and lobster tails to order. That's where you might want to try a tag-team approach and have one person stand in line and place your order before backtracking to salads and appetizers. Otherwise, you might have a long wait as diners catch on to what's going on. The steak and lobster tails are only available during the evening buffet, not the $14.98 breakfast or lunch buffet.
Even so, the lobster I got was flavorless, so when adding up the cost of about $60 for two (with 20 percent kamaaina discount for those with a local ID), one has to consider they can get a pretty good lobster meal elsewhere.
The beauty of buffet is really in the bounty for those with insatiable appetites, or those who simply like to pick and choose from many options. But maybe you've also noticed that in this town where buffets have long reigned, they've been on the wane during the past couple of years. Chalk it up to the economy and waste associated with buffets, as well as a growing appetite for quality over quantity.
I ran into someone else I know there, and surveying the scene after the meal, we counted a handful of things that we really liked, out of dozens of items. 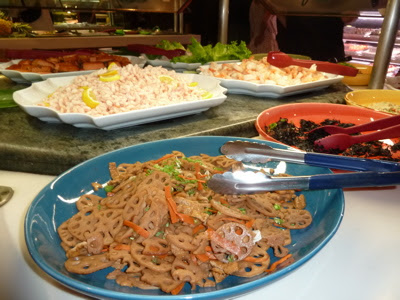 One diner told me the lotus root was good, but with so many options, I didn't try it.
Conceivably, if you do find that many things, you can fill up on those and be quite happy. But first, you have to taste a lot, the dining equivalent of kissing frogs.


Dishes I liked included all the fixings for a fresh spinach salad, salt-pepper shrimp when hot from the deep -fryer, cocktail shrimp, garlic sauteed basa and cubes of kabocha.
My friend liked those things as well, and would add a Japanese lotus salad I didn't have room to try, plus smoked salmon, though I found it was drier than it needed to be.
None of us tried the snow crab legs, which generally involve too much work for too little payoff. Maybe someone else will try it and report back.
Another plus is the sushi bar, run by Gaan Sushi over at the Waikiki Sand Villa Hotel. I wondered where the sushi was in this buffet, and you'll have to look for the abundance of sushi rolls toward the back of the restaurant. A sushi maker is stationed near the desserts, ready to prepare Gaan-style nigiri to order. This should be another of your first stops, for Edo-style sushi made with red vinegar and salt. It may take a while for some to adjust to the stronger, rustic flavor.
Last stop was the dessert station, where 35 types of cakes and desserts are available, though patrons are limited to picking up only two at a time. Oh well, walking to and from your table for the likes of chestnut and pistachio tarts, tiramisu and strawberry parfaits is good exercise. For those who want healthier options, there is mochi and flan made of soymilk.
Nadine Kam's restaurant reviews are conducted anonymously and paid for by the Star-Advertiser. E-mail nkam@staradvertiser.com.
Posted by Nadine Kam at 1:27 AM