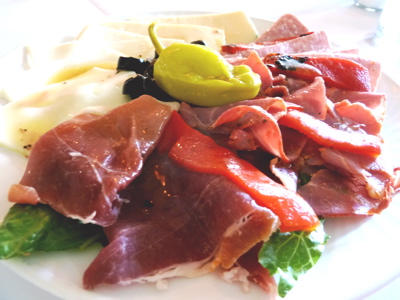 BRUCE ASATO / BASATO@STARADVERTISER.COM
Legendary restaurateur George “Cass” Castagnola Sr., center, has a new home at Castagnola’s Pizzeria in Restaurant Row. He’s executive chef, with son John, left, as kitchen manager. Another son, George Jr., is the owner.
For many people, Castagnola's Pizzeria marks a brand new arrival on the dining scene, but the name has some deep roots on Oahu.
George "Cass" Castagnola had been running restaurants in Hawaii since the 1970s when he opened his first Castagnola's restaurant in the Manoa Marketplace in the late '80s. Beyond serving food that diners loved, the restaurant proved to be a classroom for many a budding restaurateur. Castagnola's became a template for a style of Italian restaurant popular with an entire generation, and the DNA continues to runs through such restaurants as Verbano, Paesano and Assaggio, where, just as at Castagnola's Pizzeria, Cass is simply known as "Pops."

At one point, Cass had six restaurants, but by the mid-'90s had tired of the business and made his exit. But his legend was such that diners never stopped asking about him, and every now and then I'd hear of a mainland sighting or that Cass could be found driving a cab.
In reality, both Cass and his son, also named George, could be found working for Cass' star pupil, Thomas Ky, at Assaggio.
Having said all that, it wasn't Cass' idea to re-enter the restaurant business. In fact, when George Jr. told him that he wanted to do so, he told him he was crazy.
George said the idea came up last fall, starting with his desire to bring his brother home from Oregon and reunite the family in the endeavor.
"Every Castagnola kid learned how to cook," he said, reminiscing about helping to chop vegetables "when I was old enough to walk."
Since opening, George said Pops relishes being back to greet old customers and new ones. "Now, he's very happy. I think it's come together quite well."
The Pizzeria has found a home on the site of the former Pasta & Basta at Restaurant Row, across from Bambu Bar. One of the best things about it is the rollback prices. It's as if Cass were Rip Van Winkle, asleep for 20 years and setting menu prices as they were when the first Castagnola's opened.
The trade-off is that some of the frills are gone, hence the creation of a "pizzeria," rather than full-fledged "restaurant." Some may miss tablecloths and a profusion of basil and red wine in the tomato sauce. Some may not notice the difference, and some may prefer this simple comfort cuisine.
Even so, diners will be happy to find more than pizza, which comprises only a small portion of the menu.
Forget about its predecessor's pizzas. The old wood-burning pizza oven remains only for show. The new one is in the back, and there's only one style of pizza, thick with tomato sauce and cheese ($6.90), to which you can add your choice of eight ingredients for a dollar each. These are just the basics: pepperoni, sausage, meatballs, Capacole ham, mushrooms, green peppers, onion, and tomato and basil.
The first time I tried the restaurant, it was via takeout for a quick lunch because I work in the building. I didn't fall in love with the straightforward, rather bland and minimalist marinara topping the linguine and meatballs ($8.90). But I warmed to the dine-in experience, cocooned in the calming green interior -- a vast change from the harsh orange of Pasta & Basta.
Presentation made all the difference, not to mention the fact that, if you find the flavors bland, you're plied with all the Parmesan and red pepper your heart desires. 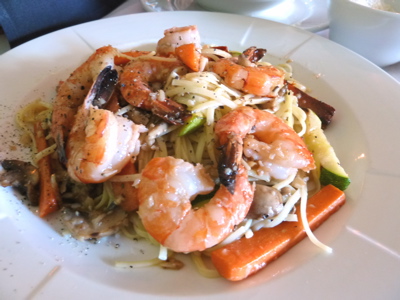 Castagnola's Pizzeria's shrimp linguine.
An antipasto plate ($7.90) features a generous array of Capacole ham, prosciutto, salami, and mozzarella and Parmesan cheese. Olives were canned black, rather than kalamatas or others more exotic, but it didn't bother me. Combined with the complimentary bread and a salad, this might be all some people need. Those salads, at $3.90 for tossed greens, and $4.90 for Caesar or seasonal tomatoes, are single portions, so don't be surprised by their small size. You get what you pay for and produce is expensive.
The marinara works well in richer dishes such as lasagna ($9.90) and eggplant Parmesan ($8.90), generous on mozzarella and Parmesan and with two layers of breaded eggplant.
And there's no skimping on pasta portions. If you're starting with appetizers or a salad, you'll likely go home with leftovers. Shrimp linguine ($10.90) in your choice of a garlic or spicy sauce would rival that of any $20 restaurant, and there's also linguine with clam sauce ($8.90), shrimp scampi ($10.90) or calamari scampi ($10.90) if you're bored by the usual shrimp.
I haven't tried the desserts yet, which include gelato or sorbetto ($3.90), cannoli ($3.90) and zabaglione ($4.90), but with such close proximity, you can bet I'll be back. Soon.
Posted by Nadine Kam at 1:30 AM