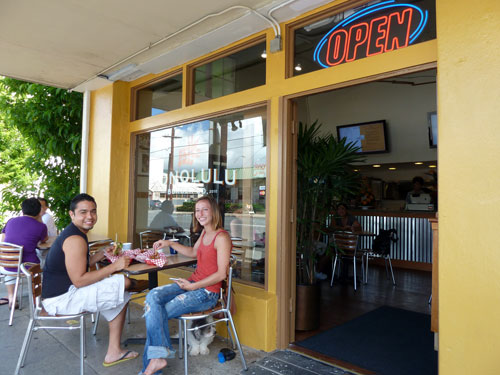 By the time I stopped into Honolulu Burger Co. a few days after its opening, another food writer about town was on her second visit and, being mostly on the same page about food, I found she'd come to the same conclusion as me, proclaiming a "New No. 1" burger in town.

Those are gonna be fightin' words for many.
That was on first impression. On second, I came away thinking it could be the best burger in town, with a little more consistency. You see, I always hedge if I think some curmudgeon is going to have a vastly different experience, as I did on my first and second visits.
It's a matter of trust. There are some restaurateurs I will go out on a limb for because I trust them. Even if the diner doesn't ultimately agree with me, I don't worry about it as long as I believe a particular restaurateur will do his/her best to get everything right.
I do have faith in owner Ken Takahashi. It's his young staff I worry about. If Takahashi is in the kitchen you'll get a perfect, moist, flavorful, medium-cooked, third-pound burger with no fillers. If not, the same burger will be compact, tough and dry, indistinguishable from any other frozen patty in town.
That's a shame, because Takahashi is certainly starting at the right place. He's created the first burger joint in Honolulu devoted to serving 100 percent Big Island free-range, hormone-free, grass-fed beef burgers. Other offerings may not be 100 percent local -- "We mix it up on the sandwiches," he said -- but the burgers are a guarantee. A dash of salt is all that's needed to showcase the superlative beef.
He's not sure if supply will be able to keep up with demand, but said: "If I have to close for a day, so be it. I am not going to run out to the store."
Ditto with the potato fries, hand cut every morning, served plain ($1.99/$2.99), with garlic ($3.99), truffled ($4.99) or with blue cheese ($4.49). He refuses to serve the frozen variety.
Takahashi grew up in Hilo, eating Big Isle beef and taking it for granted. Nobody gave much thought to whether it was grass- or grain-fed or hormone free. The more people have learned about what goes into factory-raised animals, the more diners are welcoming alternatives.
Of course, the cost associated with smaller production is higher, so the beef has more typically been available in mid-tier to upscale restaurants, out of reach of those who just want to enjoy a simple burger when they go out.
Takahashi's making up for lost time with a spate of classic burgers and cheeseburgers, a roster of seven HBC favorites, and build-your-own options.
The basic single burger is $6.79, going up to Triple XXXL at $10.79 for a triple-patty construction. Classic cheeseburgers run $7.79 for a single patty to $11.79 for the triple. Cheese options are cheddar, gorgonzola, provolone, gruyere, pepper jack, Swiss and mozzarella.
First-timers might want to start with the classics, for the burger at the most stripped down form, served with lettuce, tomato, sauteed onions and a housemade ketchup-garlic-chipotle aioli. After that you can venture into a Mushroom-Mushroom Burger ($8.95), which doesn't have as many mushrooms as the name implies; Blue Hawaiian Burger with bacon and gorgonzola, a Loco Moco Burger ($8.79), and an ultimate Hilo version, topped with bacon, Spam and over-hard egg.
Takahashi is big on multimeat combos, including topping another burger with kalua pork ($8.49) and building sandwiches such as the "Hot Rod" Chicago Style ($8.29) with two Portuguese-style hot dogs from Hilo, or "The Bull" ($9.29) comprising top sirloin, corned beef and pastrami in strips, not a big stack as some might expect.
The best of the sandwiches is the meaty, cheese-oozing Philly ($7.29). Otherwise, it's clear the burgers are the stars of this operation, paired with the hand-cut fries and an old-fashioned vanilla, chocolate, strawberry or malt shake ($2.79 to $2.99).
As for the french fries, I'm recommending the garlic version. I tried to get the truffle version, which was devoid of truffles or truffle oil. Again, the kids were in the kitchen and I know they didn't forget, so either they don't know how to use it or were trying to cut corners.
Other nice Big Island touches are Atebara chips and the kind of small-town hospitality that had Takahashi distributing goodie bags full of snacks to customers on opening days.
And his aim is to source local products wherever possible, including use of Patisserie breads, alaea salt from Kauai, and produce from isle farms. "The whole thing is we work together locally to help each other," said Takahashi, whose motto is "Grown, bred, fed local."
Posted by Nadine Kam at 1:30 AM