Seafood a second thought at Tairyo

JAMM AQUINO / JAQUINO@STARADVERTISER.COM
One of the best ways to appreciate Izakaya Tairyo's colorful exterior is to view the roof of the Piikoi Street building from above.

To glance upon Izakaya Tairyo is to come close to witnessing an ukiyo-e print spring to life in 3-D. The art form's Golden Age was from 1603 to 1868, when Edo, a small fishing village chosen to be the capital of the Tokugawa shogunate, grew into a city bustling with culture, arts and commerce.
You can almost feel the vibe standing on the street corner at Piikoi and Hopaka, with Ala Moana Beach Park within eyeshot, and neighbors that include restaurants, industrial shops, small boutiques and bars.
Among this vibrant, colorful mix, Tairyo manages to stand out like a beacon calling all ashore. Super-flat imagery of fish and ocean waves swirl around the restaurant's rooftop and exterior, while the interior is festooned with the paraphernalia of the fisherman's trade such as nets, glass floats and lobster traps.
Drawn by the color, I was standing outside reading the menu when someone I knew, originally from Japan, passed by. He'd just eaten there a few days before, so I asked him what was good. He had been told to order the steak, so that's what he did and said he found it to be so-so. Of course, he blamed himself for ordering steak at a restaurant obviously all about seafood. The word
"Tairyo" loosely translates into "big fish harvest."
"Love the one you're with" may not make the best relationship advice, but it certainly applies at most restaurants. It's widely assumed that at a seafood restaurant, one should order seafood. But what if the steak really is one of the best items on the menu? The problem is, this restaurant isn't as infatuated with seafood as its theme implies. It's the Planet Hollywood equivalent of the izakaya -- slick and fun, but who really went there for great food?
MY FIRST clue that something was fishy was a quick glance at the sushi selections, which register as sushi for beginners. There wasn't much depth to the tame offerings. There was only ahi ($6.75), salmon ($5.50), marinated mackerel ($5.25) and white fish of the day ($6.75). Then there was shrimp ($5.75), scallop ($6), squid ($5.50) and ikura ($6.50). That's all. No hamachi. No uni. No eel. What's more, the sweetness of the rice battled the flavors of the fish, which wasn't even as good as that at conveyor-belt establishments.
When it came to sushi rolls, I was expecting contemporary-style layering of ahi, salmon, white fish, avocado, salmon roe and more from the Tairyo Roll ($12.50), but the ingredients were tightly packed in the traditional nori roll that was so densely chewy I found myself thinking more about the rice than the seafood center.
Granted, people go to restaurants for more than just the food, and this place can be fun with a bunch of friends and a lot of sampling. There's a lot to be said for atmosphere and decor that's different from anything else in town. You'll find yourself adapting to sitting on plastic crates with a seat affixed to the top. It's only tricky when you first sit down. 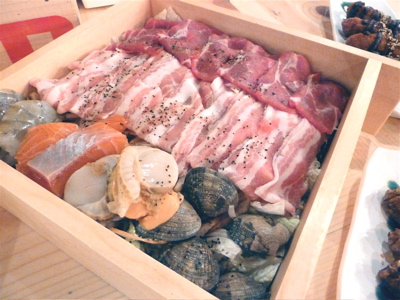 Nadine Kam photos
The “Harvest From the Sea and Mountain” basket feeds two or three people with its combination of pork, beef, clams, mussels and salmon. The ingredients are steamed and presented, below.
FOR THOSE who seek balance in their meals, start with one of four salads. Tairyo seafood salad ($7.75) comprises more lettuce than seafood (a little bit of crab, salmon roe and sashimi), but the greens were welcome in a cuisine that generally doesn't make room for fresh greens. A Caesar salad with avocado and papaya ($7.25) also sounded tempting, but its combination of cheese and cream dressing did the papaya no favors.
Heavier fare was represented by a grilled chicken meatball ($7.25) with a "secret sauce" not so different from mere teriyaki. The meatball is about the size of a flattened baseball, so on the one hand, it's two to three times bigger than most tsukune. The inside is flecked with bits of veggies, and although I enjoyed it, it will register as plain tasting to most people because all the flavor is in the outer sauce. In this case, dividing the dish into two smaller meatballs would help to distribute the flavor more evenly throughout.
One of the most impressive dishes was the Tairyo Fisherman's Hot Pot, also one of the more pricey dishes at $22. The shared dish features salmon, tofu, clams and shrimp, along with tofu, bean threads and won bok. The pot is on the small side compared to other hot pots around town, so you're also presented with a side of cooked udon to add to the pot as it empties. When I started eating it plain -- just as delicious to me -- our server got alarmed and told me to add it to the pot, but I actually enjoyed eating it while waiting for the other ingredients to cook. It doesn't take long. 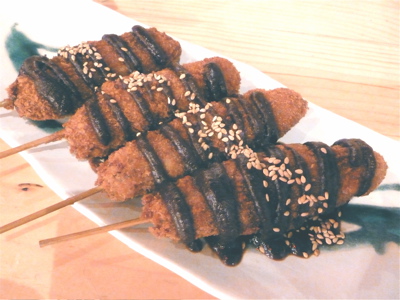 Miso kushi katsu (skewered pork cutlet with miso) is one of the restaurant’s specialties.
The clams are the same small specimens ($8) steamed in sake and garlic on the hot dish menu. A dish of Agedashi Tofu and Vegetables ($6.50) is just as good and has more heft.
Assorted tempura is more pricey than it should be, at $16.75 and considering it did not deliver on all the seafood described on the menu. There were two small shrimp and salmon. M.I.A. were a piece of scallop and white fish, but I did enjoy the large piece of onion pumpkin and deep-fried avocado.
Also on the fried menu, and appearing at most tables, were sweet potato fries ($6.25) served with a pool of honey crossed with mayonnaise. It's a waste because the sweet potato packs its own sugars. The fries aren't crisp; the stiff ends and chewy texture are more consistent with something baked and left sitting for a while.
You'll leave on a sweet note if you order the frozen creme brulee ($5.25), a cool take on a traditional favorite, with the texture of cheesecake.
Posted by Nadine Kam at 1:30 AM