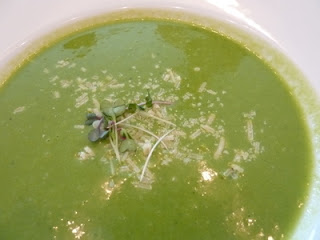 In May I read a short restaurant review by Hannah Goldfield in The New Yorker about a SoHo pop-up called What Happens When. I was going to be in New York the following month, so I took note, though I'm careful not to fall for the hype emanating from a growing legion of wide-eyed, shrill class of writers. I find The New Yorker reviews to be colorful, but also sober and truthful.

It sounded so precious, billed as a pop-up installation involving artists and musicians, with themes and decor that would change every month. They even turned to Kickstarter to raise funds for materials to construct their sets. Themes had ranged from a midsummer's night to an Impressionist's garden party. Sounded like a place I had to see, and it was set to remain open nine months.

When I headed to New York June 20, I was going to be there for a month and thought I had all the time in the world to make a reservation there. Unfortunately, after a side trip to Connecticut, I returned to the city to read that due to a liquor license dispute, the pop-up closed on June 26!

Happily, the chef involved with the project, John Fraser, an alumnus of The French Laundry, is also the proprietor of Dovetail, at 103 W. 77th St. (212) 362-3800. In the pantheon of New York restaurants, it's not a top-of-mind place, the kind that get a lot of buzz outside the city, like Momofuku, Spice Market, Le Bernardin, Per Se and Maialino. But I had to see what Fraser's food was all about.

When I got there, I saw a huge group of teen-agers hanging out, sitting near the front steps, devouring french fries. I wondered what that was all about. A quick map search showed a Shake Shack burger haven next door. Earlier in the week, I had spent an hour in line for a Shake Burger and frozen custard, and as I was sitting in Dovetail, contemplating the long meal to come (do people have the patience for traditional long meals anymore?) I briefly considered leaving in favor of the quick fix.

But my patience was rewarded with Dovetail's delectable chef's tasting menu.

What I like about fine cuisine in New York is the precision, purity and clarity of flavors. There's nothing gratuitous or extraneous in the prep, because it's the essence of the various main ingredients that they want expressed. 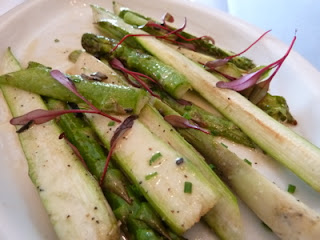 Simplicity works for me. In the first of my numerous "best meals ever in the city," I enjoyed no more than a seasonally inspired fresh chilled pea soup, grilled asparagus and BG Deviled Eggs with arugula and pancetta.

It's the opposite of Hawaii style, which, like our culture, is chop suey in nature, as if the more you throw into the pot, wok or marinade, the better. Sometimes it's a happy melting pot. Sometimes it's just mush. Amuse bouche was a deconstructed martini foam with pimento and olive, accompanied by a crisp salt cod fritter and shiitake gelee. 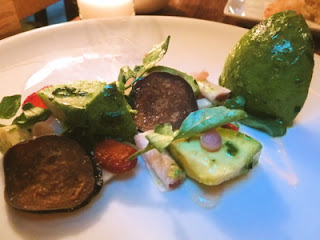 Avocado salad with strawberries, watercress and slices of Granny Smith apple dipped in the ashes of charred ramps. 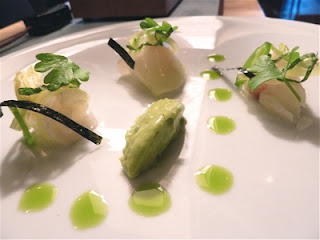 Rolls of fluke were served on thin slices of Galia melon, with a celery-avocado puree, shishito peppers, thin slivers of nori, and dots of shiso sauce. 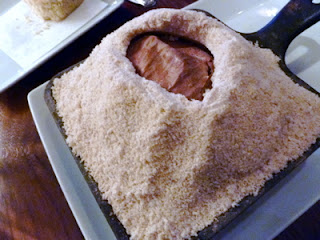 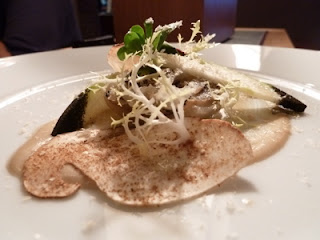 Salt baked onion was introduced in its just-out-the-oven form, which temporarily caused me to freeze in panic. How was I supposed to get to it without filling it with salt. Happily, that was just for presentation. It was plated in the kitchen with summer truffles, cepes, marcona almonds and frisee. A manager came by and asked how I was enjoying it. I said it was so good I wanted to lick the plate. He encouraged me to do so. I refrained. 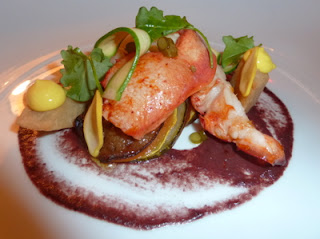 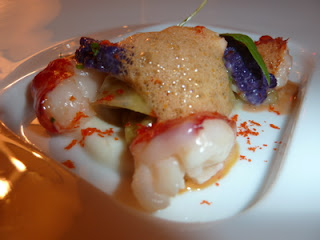 Lobster was served two ways, first accompanied by a perfectionist's ratatouille, with the summer vegetables cut into thin discs and layered like poker chips, served over kalamata puree. In the second prep, lobster topped chamomile tagliatelle, tossed with saffron aioli and accented with lobster foam and and purple cauliflower. 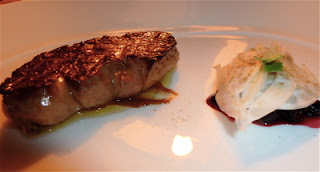 Sautéed foie gras was next, sitting on a pool of textured Graham cracker sauce, accompanied by fennel and huckleberry sauce. 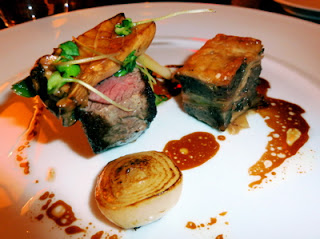 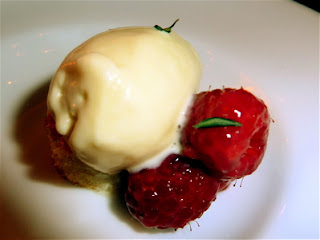 An intermezzo of lemon-thyme sorbet with raspberries preceded a choice of dessert. 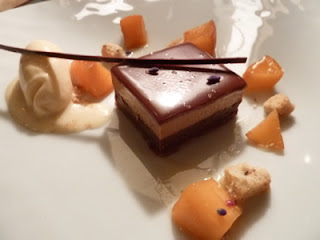 Because I had seen someone else enjoying the milk chocolate Gianduja bar as dessert on a summer tasting menu, I had to try it. It was accompanied by apricot-lavender sherbet. 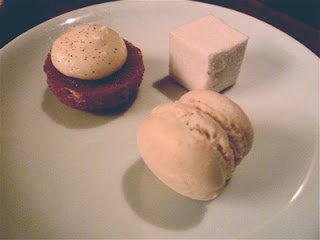 And just when you thought it was over, there remained petits fours to polish off.
Posted by Nadine Kam at 8:08 PM