It was fun to catch up with some former Hawaii residents while in New York, and it was interesting to combine their restaurant picks with my own for a diverse picture of food in the city.

I met up with Katlin Taosaka, now with Rag & Bone (Hawaii designer Dan Weaver is also there), at Northern Spy Food Co., a small under-the-radar gem in the East Village, at 511 E. 12th St. I noticed a milliner's sign across the street, but it was closed. I planned to go back there after brunch, but I was caught up in going to Opening Ceremony with Katlin, and forgot all about it! 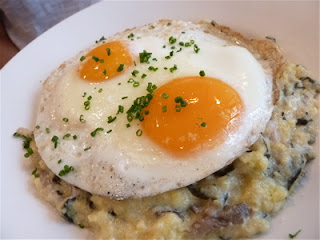 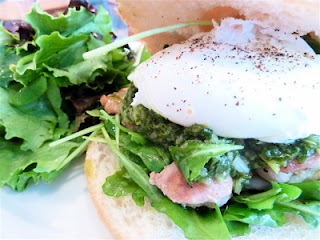 Nadine Kam photos
Northern Spy's focus is seasonality and locavore sourcing of locally-grown, -caught, or -produced ingredients whenever possible. Katlin had polenta and eggs, while I had the chicken and egg sandwich.

Katlin had to go to work just before Lynne O'Neill met me at the Muji store, and we walked back to Opening Ceremony to check out the Reyn Spooner collection. She had only been to the smaller satellite at the Ace Hotel. Then we made our way to the High Line and Chelsea Market for lunch. Chelsea Market is a New York institution, dating to the 1890s baking industry. Today, it's home to dozens of retailers and food purveyors, from Morimoto to Fat Witch Bakery, Chelsea Wine Vault and Anthropologie. Lynne wanted something healthy, so opted for tofu and vegetables from Chelsea Thai. I had just eaten, so ordered a small bowl of potato-leek soup from Hale and Hearty Soups. 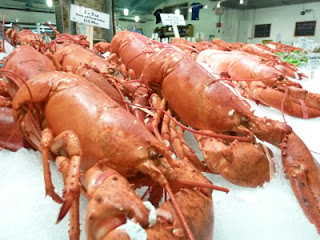 Namesakes at The Lobster Room in Chelsea Market. Below, one of the Jonah crabs lifted its claws to defend against my camera intrusion. 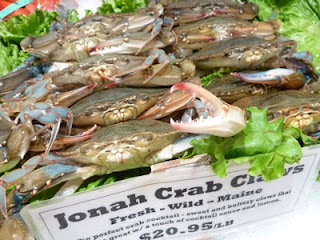 It was crowded at lunch time, and hard to find a table, so I swooped down on two women who had finished lunch, hoping they would be leaving soon. Instead, they wanted to chat. The one in from Long Island for the day to visit with her sister said her son had just visited Maui and now wants to move there and go to school. She said, "I don't know why he wants to move there, maybe it's cheap or something?"

Haha, shows you how little people know about our circumstances. In many ways, it's much more expensive to live in Hawaii than New York. What makes NY so pricey is that there's so much exciting going on at all times, that there's more of an urge to go out, see and do, and that's what gets expensive. Otherwise, food and rent are comparable, and food there can be much cheaper because you can find excellence at every price point. 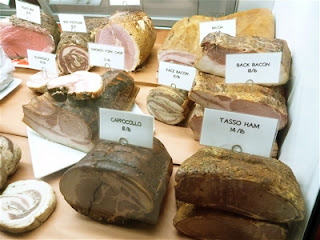 On display at Dickson's Farmstand Meats at Chelsea Market.

Before Lynne arrived with her order, the women had invited me to meet them at Lincoln Center for a free outdoor concert later that evening.

Next, I caught up with Urban Nomad's Freida Hulse, known in New York as Haruko, at the trendy Williamsburg eatery, Fatty 'Cue, for barbecue with the essence of Southeast Asia. Critics there are gaga for fish sauce marinades on pork and Melakan-style lamb ribs which are delicious, but the ideas are not new to Hawaii. You can get the same flavors at any Vietnamese restaurant. The ingenuity is in the Western-style format. 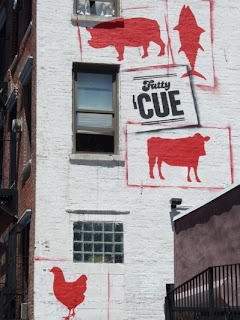 The stencil-style wall tells you you're getting close to Fatty 'Cue. 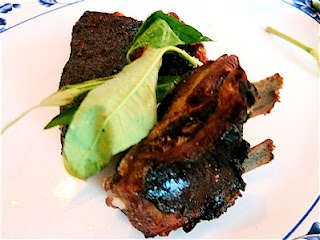 Cincalok and white wine brined lamb ribs are a "snack" at Fatty 'Cue. 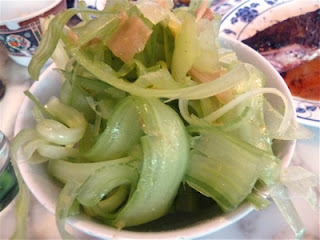 And don't forget the greens, a delicious celery salad at Fatty 'Cue. 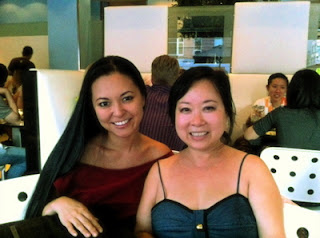 Joey Caldarone took this photo of Ivy and me at Cafeteria.

The night I was leaving, I met designer Ivy Higa and Joey Caldarone at the trendy burger joint, Cafeteria, at 119 7th Ave., home to many good-looking waiters and which they say started the city's mac n' cheese craze. Both mentioned they really miss laulau and luau.

Ivy's still working with Zac Posen, as well as on her spring 2012 collection, and Joey's at Tiffany. We had a nice talk about how fashion is such an insulated, all-consuming world that we have to remind ourselves that it doesn't reflect most peoples' reality. Sometimes we have to pinch ourselves to remind ourselves that people need food and housing, they don't need fashion. To stay grounded, Ivy volunteers for a couple of homeless shelters and organizations and was slated to help distribute food the next morning. 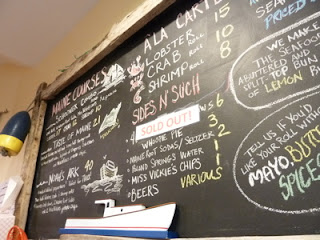 The chalkboard at Luke's.

By the time I left, I had a couple of my own favorite places to recommend or bring friends the next time around. If you read my quintessential New York and Hawaii food lists in the Star-Advertiser, you'll know I made mention of my lobster roll search that ended at Luke's Lobster. Ironically, when I got home, I found a copy of a Luke's Lobster review I had torn out of The New Yorker magazine a year ago, so I think it was meant to be!

There, I enjoyed a chocolate brownie sundae with real mint, not mint-flavored, ice cream, topped off with a real cherry instead of a candied one. I had that with a root beer float and dessert of chocolate chip cookie. I had hoped to ship some cookies home, but alas, they do no chocolate shipping during summer, when their perfect products might melt. Better luck during the holidays! 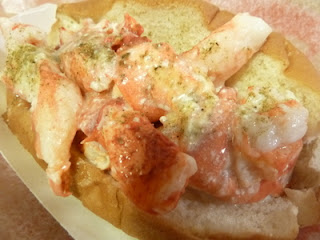 The prized lobster roll at Luke's Lobster, in all it's buttery glory. 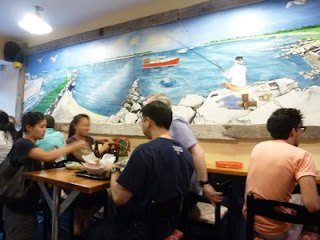 The setting at Luke's, 426 Amsterdam Ave., Upper West Side, with room for about 14. They have a mobile unit and three other locations in Manhattan, and one in Washington, D.C. 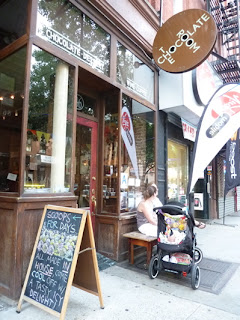 Outside The Chocolate Room in Park Slope, home to many a young family. 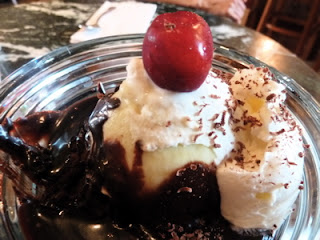 The Chocolate Room's Chocolate brownie sundae, which I opted to have topped with mint ice cream. They also make a vegan, organic chocolate sorbet for those so inclined. 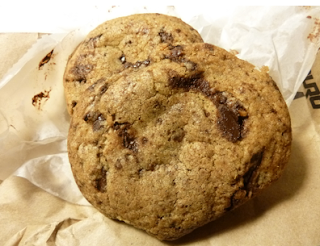