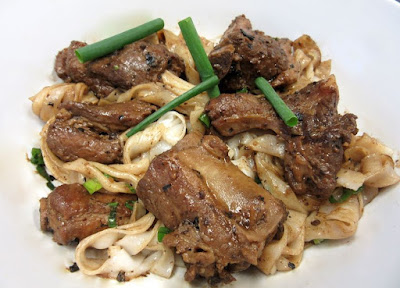 In Chinese four pillars astrology, my bazi chart is heavy on water. Water flows. Water can be as gentle as a brook or raging like a tsunami. It's one of the strongest of the elements, seeping into crevices to break rocks apart. In relation to the other elements, water douses fires, rusts metal, causes seeds to sprout from the earth, and nourishes wood.

Because water is an unstoppable force, I love freedom and hate being put in a box. I disdain authority, which is represented by metal.

There is no metal in my sign. So, the surest way to make me do something is to tell me I can't do it.

I was in Shanghai a few years ago and met a designer from Brooklyn who, after starting his business in China, became fluent in Mandarin. A disciplined sort in contrast to my free spirit, he dared me to learn the language and wanted to bet that I could not do it in a year.

Whoa, them's fighting words! So next thing you know, I started attending Mandarin classes offered by the See Dai Doo Society. Difficult, serious stuff, but it's not all about how hard work. The society's programs extend to other cultural pursuits such as Chinese cooking. 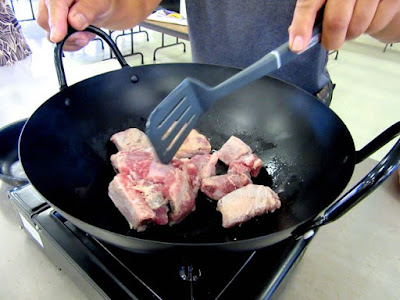 Start with three pounds of ribs that have been parboiled and lightly dredged in flour.

I was interested in the dau lau, or mochi balls, because it's something my mom made when I was a child and over the years, everyone got busy, moved away from home, and I forgot all about dau lau until my memory was sparked by seeing it again at a new year festival at the now-shuttered Grand Café.


It is a new year treat that can be enjoyed anytime of year. Unlike anything in Western cuisine, every element of the dau lau is symbolic, starting with the white of the mochi rice flour, representing purity, according to society member Sharlene Chun. Its spherical shape represents infinity, with no beginning and no end. The stickiness of the mochi rice also represents family cohesion, and toppings of coconut represent good health, peanuts stand for longevity because of the length of the vines and the nuts' enduring quality, sesame seeds reflect an abundance of sons and wealth, and the sweetness of brown sugar is equal to the sweetness of life.

There's a reason the "Popo's Kitchen" cookbooks have held up over time. The recipes are simple to make and delicious. For the spareribs, for example, all the ingredients went into a wok and simmered for 45 minutes, with all the magic happening while the cook rests.

Then, of course, the best part of the demo was the feast that followed. While Tong and her assistants demonstrated cooking in small batches, more work was being done in the society's kitchen, where volunteers humbly cooked up what they called a "snack," but the rest of us would call a meal, for about 50 lucky souls. Xie xie! 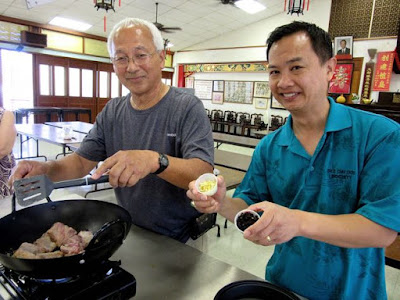 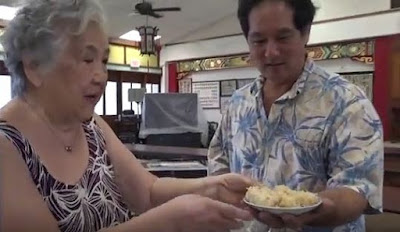 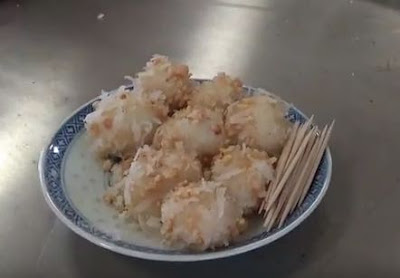 —————
Nadine Kam is Style Editor and staff restaurant critic at the Honolulu Star-Advertiser; her coverage is in print on Wednesdays and Thursdays. Contact her via email at nkam@staradvertiser.com and follow her on Twitter, Instagram and Rebel Mouse.
Posted by Nadine Kam at 3:18 PM