Who named the poke bowl? 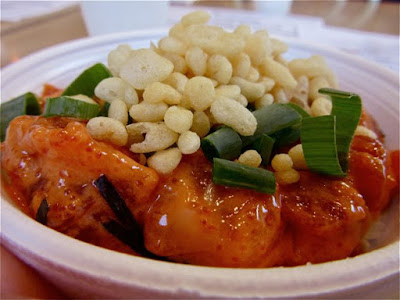 Nadine Kam photos
Pa’ina Cafe’s Poke Crunch Bowl starts with your choice of white or brown rice with teri glaze, nori and your choice of poke, topped with crispy tempura flakes inspired by udon for awesome texture. They are now approaching a milestone of selling their millionth poke bowl sometime this summer.

Ward Village hosted an Auahi Street Dine-Around dining event on June 29 as an introduction to its newest restaurants, Agu, Bellini, Ginza Sushi, Mexico and Pa’ina Cafe-Ward Centre. I had already visited all of them, but never like to miss out on a potential story, so was willing to retry.

And what a story I found when, at Pa’ina Cafe, co-owner Derek Uyehara hit me and writer Simplicio Paragas with the tantalizing bit of information that he and his partners had come up with the poke bowl name in 2008 when they opened Paina Cafe’s predecessor, The Poke Bowl, at the Ward Farmer’s Market.

It’s amazing because this little bit of Hawaii food history happened within a decade or so, and few of us noticed. I never paid much attention to Pa‘ina Cafe’s catchphrase, “Home of the Original Poke Bowl,” because in these days of excess branding, there’s a lot of cred inflation going on. And, the photographic proof predates Instagram, which launched in 2010.

I truly believe that in the future, all claims of food origin will be settled via social media. With chefs and thousands of diners snapping pics of their creations/meals every day on Instagram, coupled with aggregation, it will be much easier for future historians to find first mentions of a specific dish.

When it comes to works of literature or music, authorship can be proven by copyrights, but taking credit for food creations is more difficult.

England’s 18th century 4th Earl of Sandwich is credited for inventing the sandwich when, during a card game, he became hungry but didn’t want to stop playing. As the story goes, he sent a servant to fetch bread and slices of roast beef, thus forever becoming immortalized in the lexicon of food we can’t live without.

But who’s to say some anonymous shepherd didn’t do the same with some slices of lamb when hunger arose in the field? The only difference? No historian was there to document the event.

As marketing became more prevalent, it became more important to establish first-server status as a matter of having proper bragging rights.

Depending on who you believe, the Caesar salad was the creation of Caesar Cardini during a busy Fourth of July, 1924, in his Tijuana, Mexico, restaurant, or by his partner Paul Maggiora, in 1927, or by an employee, Livio Santini, who claimed he made his mother’s salad in the kitchen of Caesar’s in 1925, and that Caesar took his recipe. Thus making Santini’s mother the actual creator.

Locally, the most high-profile battle for credit took place over the mai tai, which was either the creation of Don the Beachcomber (Ernest Raymond Beaumont Gantt) in 1933, Trader Vic (Victor Bergeron) in 1944, or music man Harry Owens in 1954.  (On a side note, Owens' grandson Alex, also naturally gifted musician, was one of my roomies when I lived in Kailua, but we never talked about the mai tai.)

Honolulu Advertiser three-dot columnist Eddie Sherman questioned the origin of the mai tai in 1970, causing Bergeron to quip, “Anyone who says I didn’t create this drink is a dirty stinker.” 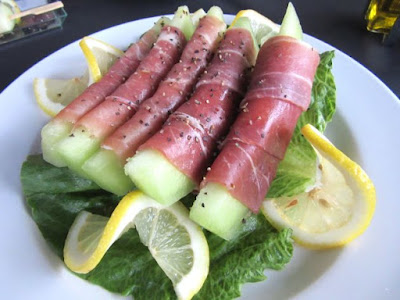 Proscuitto and melon was accompanied by bellinis at Bellini.

I’ve been writing about food for a quarter century, and I believed the ubiquitous poke bowl was something that has always been around. After all, what could be easier than scooping poke over rice? But as I thought more about it, fish is generally considered one of the most expensive items on a plate, and therefore poke was often a dish served on the side in a small portion on Hawaiian plates, on buffet lines, or sold by the pound at fish markets and grocery stores, to pick on like pupu, or throw over rice yourself at home.

But I never ate poke bowls until Pa‘ina Cafe made it easy to pick one up as a quick, inexpensive lunch.

One reason commercial establishments didn’t put two and two together is because the hot rice would cook the fish, which defeated the purpose of ordering the raw seasoned fish. Cooking poke wasn’t done commercially until poke don Sam Choy introduced us to “Sam’s original fried poke.” I wrote about it in 1997 when he opened Sam Choy’s Breakfast, Lunch and Crab. By the time he opened Sam Choy’s Kahului in 1998, he was calling it “Fried Poke Magic” and it was still so new I had to explain it had been “seared and served around a mound of rice.” It was served entrée style on a plate, not in a bowl.

He had launched his Poke Festival in 1991 or 1992, and I attended many over the years. The poke was still a star in its own right, and rice was nowhere in sight. Guacamole is always made to order at Mexico Restaurant.

Pa‘ina Cafe co-owner Blaine Kimura explained that he and Uyehara were brainstorming with Uyehara’s brother Craig in 2007, when they needed a name for a concept they were about to unleash, the build-your-own poke bowl. Opting for simplicity, someone said, “Why not just call it a poke bowl?”

“At that time I was looking for a one-handed meal, something you could carry,” Kimura said. “A lot of yogurt shops were opening and I liked the idea of customization. Choose your rice, choose your sauce, choose your toppings.”

But over on the North Shore, Kahuku Superette’s claim to fame is being “home of the best poke,” and Sheraton Waikiki executive sous chef Colin Hazama remembers frequently eating poke over rice there as early as 2006. “I would go diving out there and eat that before I started working at Rum Fire, which was in 2007,” he said. But the dish was not offered as a poke bowl. Diners simply requested to have their poke served over rice.

I put the poke bowl claim out on social media, and friends and followers quickly piped up that they swore they could get poke bowls at Gyotaku more than seven years ago.

Gyotaku co-founders Tom Jones and chef Nobutaka “Tony” Sato were considering acquiring Suehiro restaurant in 2001, and ate there as way to study the operation.
“They were serving poke with salmon belly, ahi, hamachi and tako, for something like $4.95,” Jones said. “It was the first time I’d ever seen poke made with an assortment of high-quality fish. I thought, ‘Well no wonder they’re losing money, they’re giving this stuff away.’

“A week later, I ordered it again with a side bowl of rice, and I told Tony we’ve got to put this on our menu.”

A deal was struck, the Suehiro name changed to Gyotaku, and in early 2002 they introduced their new dish as “assorted poke don,” using the Japanese word for “rice bowl.”

Sato, who grew up in Iwate, Japan, said, “Japan has something similar to poke don. We call it zuke don, many pieces of maguro in shoyu over rice.”

“Zuke,” meaning “marinated,” was developed by fishermen during the Edo period (1603 to 1868), as a means of preserving their catch.

He has a point. Hawaiian poke consists of sea salt, limu and inamona. There would be no ahi shoyu poke without the Japanese influence. 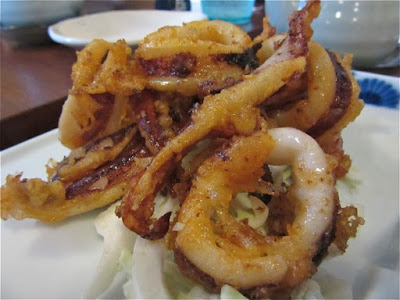 Calamari, sushi and teishoku plates were served up at Ginza Sushi.

“My background is in the IT business, so we did a lot of searching for poke bowl references online and we believe we were the first,” Kimura said. “As more people, Foodland and Times started offering poke bowls, we came up with spin-offs like the Kewalo Bowl and California Bowl.

“At one point, I was talking to Mel Tanioka, the godfather of poke, and he told me he wanted to start offering poke bowls, and I said, ‘Go for it!’

“Anybody can make a poke bowl, but we wanted to do it for a mass market.”

During our phone interview from California, where he is vacationing, he said he’d seen several poke outlets and as the idea spreads far beyond our shores, he said what’s most important now is to let the rest of the world know that poke and poke bowls are Hawaiian products, no matter who came up with the name. 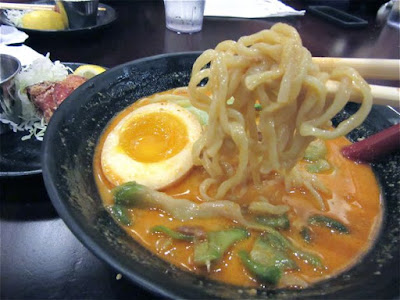 ———
Nadine Kam is Style Editor and staff restaurant critic at the Honolulu Star-Advertiser; her coverage is in print on Wednesdays and Thursdays. Contact her via email at nkam@staradvertiser.com and follow her on Twitter, Instagram and Rebel Mouse.
Posted by Nadine Kam at 3:07 PM