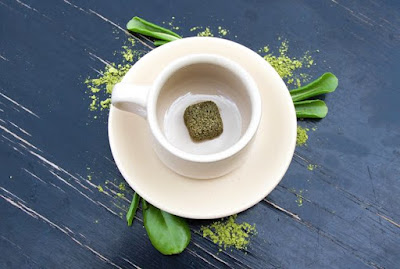 Tea Drops photo
Tea Drops provide a convenient, portable way for tea lovers to enjoy a their favorite beverage whereever they go. In the cup is a tumeric tea drop. They come in a variety of shapes and flavors.

I love tea, but I'm also lazy, and that's a problem. Because, good tea requires a lot of implements, whether it's a bamboo whisk for your matcha powder or infuser for leaf teas. Then there's cleanup. There are a lot of times I'll pass in favor of an easy sugar-saturated juice instead.

Sashee Chandran also found it difficult to enjoy a fresh pot of tea while working in an office. But, unlike me, she was determined to do something about it, because tea is in her blood. She grew up steeped in tea culture east and west. Her mother is Chinese, and her father is Sri Lankan, raised in the British tea tradition.

"I realized how difficult it is for people to make tea, but there are a lot of people who would drink tea if the process could be simplified, so I spent 2-1/2 years experimenting in my kitchen," said Chandran, who was in town to share her creation at the Hawaii Lodging, Hospitality & Food Service Expo that took place July 13 and 14 at the Blaisdell Center. 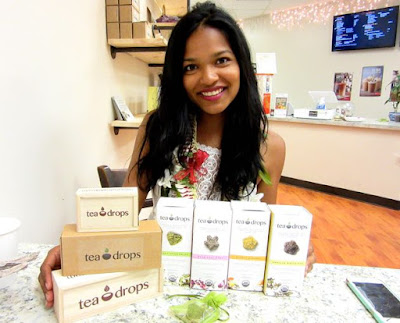 The result is Tea Drops, organic teas and spices ground fine compressed into a variety of shapes, that can simply be dropped into a cup of hot water any place, any time. The drop dissolves in hot water, and voilá, hot (or cold) tea in flavors such as Cardamom Spice, Chocolate Earl Grey, and Citrus Ginger, all with a touch of organic sugar. (Sugar-free options are coming in fall.)

I have to say I was confused when someone gave me a couple of drops with no instructions. I placed it in my cup, expecting it to dissolve into loose leaves. When it just disappeared, I was like, "What is this?" It all came clear when I was able to sit down with Chandran—how else?—Over cups of tea.

Although tea fanatics in Hawaii prefer their teas sugar-free, Chandran said she loves chai and the British tradition of adding milk to any tea, so her first impulse was to recreate that combination of sweetened milk tea spiced with cardamom, cinnamon and cloves.

"I'm the last person who should have been experimenting in the kitchen. I have no chemistry background, no food service background, but I did know how to make a good cup of tea because I've been drinking it all my life. The hardest part was finding the right proportion of tea vs. spices and organic cane sugar to make it balanced." 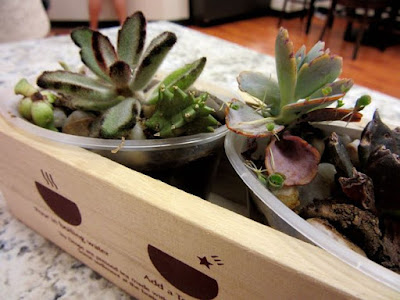 Tea Drops come in paper or reusable and gift ready wood boxes. When done, the boxes can be upcycled in myriad ways, including finding a second life as a desktop or windowsill planter for your cacti garden.

She made the first batches just for herself, which she dropped into cups of hot water while working at eBay. Co-workers who witnessed it started asking, "What's that?" Pretty soon, they wanted them for themselves and Chandran was in business. With her background in ecommerce, she launched an online shop and within a couple of months was able to leave her full-time job.

Tea has now become part of her philosophy toward promoting a happy, healthy and sustainable lifestyle. Tea Drops all-in-one recipes eliminate the need for teabags and sweetener packets. The boxes are 100 percent biodegradable and compostable. Paulownia wood boxes can be repurposed for storage or used as planters.

She has also been experimenting with adding tea drops to cookies, soups, and making tea-infused soaps.

"I feel like this is the right time for it. People are into organic, they're into tumeric and matcha. There's something for everyone. Each tea has its own medicinal properties."

Turmeric, for example, has been used for centuries to treat wounds and infections. Modern science has shown that its main ingredient, curcumin, has antibiotic and antioxidant properties. According to WebMD, other chemicals in turmeric are anti-inflammatory, considered beneficial for overall health.

Her teas are now available in 200 small boutiques across the nation, including Nic's Island Cafe in Kukui Plaza. They are offered in single-flavor boxes at $16.50 for 10 drops, or a giftable wood box that can be customized with eight drops, for $18. It has been a popular seller during holidays, for both individuals and corporate gift givers looking for something new that also happens to be thoughtful, healthful, time-saving and beautiful.
———————————
Look for Tea Drops at Nic's Island Cafe at 50 S. Beretania St. Call 200-7416. Or visit myteadrop.com. 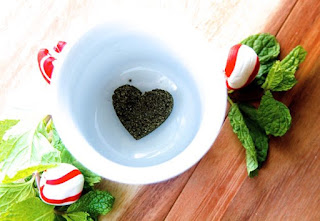 Tea Drops photo
Ground tea leaves are compressed into different shapes, in just the right amount to create an 8-ounce cup of tea when water is added. The heart shape represents Sweet Peppermint.
Posted by Nadine Kam at 7:35 PM

Email ThisBlogThis!Share to TwitterShare to FacebookShare to Pinterest
Labels: tea