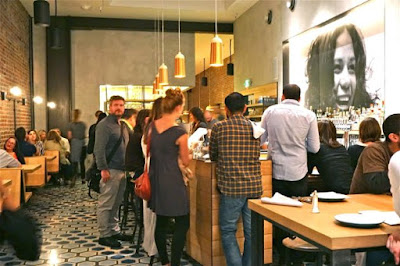 Nadine Kam photos
Patrons flock to the bar at Liholiho Yacht Club where a portrait of chef Ravi Kapur’s mom, circa 1975, is a beacon of warmth and aloha.

SAN FRANCISCO — One of San Francisco’s hottest restaurants brings a taste of Hawaii to the menu.

In a city where dining can seem overly precious — at Sons and Daughters we were privy to the source of every item on our plate, just shy of knowing the name of the bantam that laid the egg on our plate — Liholiho Yacht Club’s big plates, massive portions is a bold and perhaps long-due step in the opposite direction.

This is no delicate flower of a restaurant. It’s sort of Pacific Rim on steroids. Just as Spam our way is gaining buzz across the nation, LYC chef and co-owner Ravi Kapur finds himself in the right place at the right time with offerings such as housemade Spam fried rice and an Ohana Table for bringing family and friends together for a no-brainer evening. Just tell them how many in your party, and they’ll prepare 10 to 12 shareable dishes at $55 per person, with a minimum $440 booking. 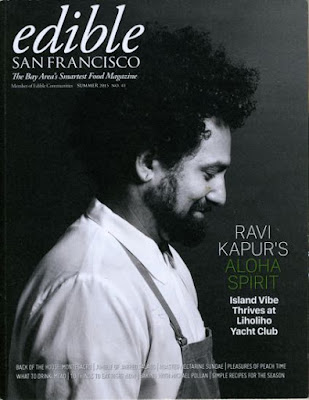 Bon Appetit magazine recently featured Kapur in a Spam roundup, and the chef was also made the cover of the summer 2015 edition of Edible San Francisco magazine.

Kapur’s cred hails from having grown up on Oahu, then working at San Francisco’s Boulevard and Prospect restaurants before launching his popular LYC popup events in 2012. His Nob Hill bricks and mortar location became a reality with the help of Allyson Jossel and Jeff Hanak of Nopa.

You can sense the Hawaii connection at the door, where floor tiles spell “aloha” in blue against a white backdrop and staffers look like people you saw every day in high school. Enhancing the bar area is a black-and-white portrait of a young, beautiful, smiling wahine, who turns out to be Kapur’s mom, circa 1975. The warmth is palpable and no doubt feels like safe haven for those seeking a break from snob rule. 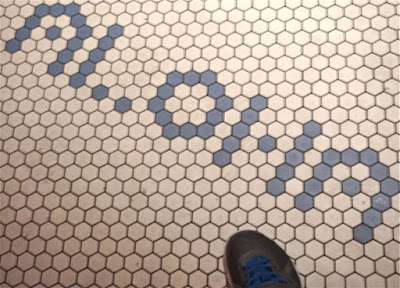 It’s a pleasant place to hang out, so it’s packed every night. For me, the best seats in the house are toward the back of the room with an overview of the open kitchen where the multi-cultural alchemy happens. Like most chefs in Hawaii, Kapur draws from his chop suey experience, growing up eating Asian, Southeast Asian, Hawaiian, Indian and Portuguese cuisine. Those influences have made their way into his plates in a way that will look familiar to anyone with roots in the isles.

Having ordered a lot of the heavier dishes, my one regret was passing on the Spam fried rice. I mistakenly imagined this to be like typical island fried rice, with the Spam chopped into an itty bitty mince. Only after we left did I do an Instagram search of the restaurant’s offerings and came across the attention-grabbing large slabs of Kapur’s housemade spam over rice that looked so delish. I’m pretty sure that if this restaurant were transplanted here, people would be lining up for this.

It’s wonderful to see the flavors we love connecting with people beyond our shores thanks to transplants like Kapur and in New York, Noreetuh’s Chung Chow. And the vicarious spotlight on Hawaii’s food culture is bound to spill over closer to home.

Here are the dishes sampled: 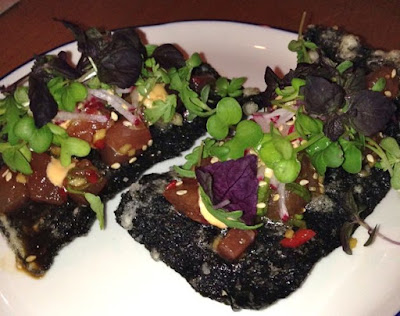 An appetizer of poke ($15.50) with sesame oil and radish served over nori crackers. 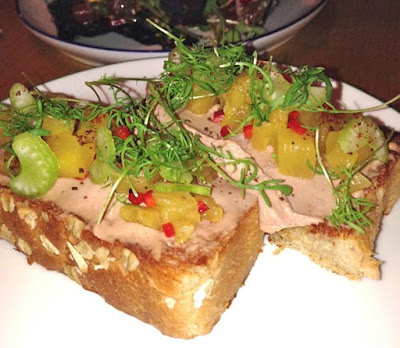 Duck liver toast ($9.75) topped with jalapeño and pickled pineapple. I’d never seen this combination before, but savory-meets-sweet is perfect chemistry. 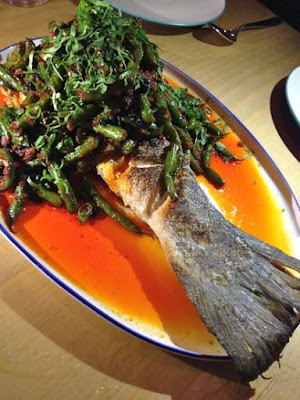 We couldn’t resist trying one of the specials of the day, a salmon tail made to serve three to four. The salmon tail swimming in a pool of red chili sauce and smothered with black bean-sauced green beans was a strange vision, but it was so delicious, and worth raving about and sharing snaps for days to come. 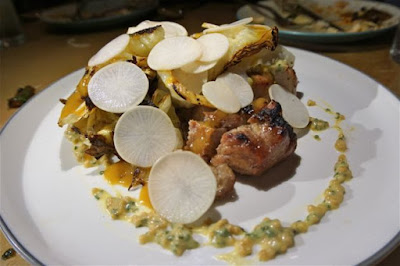 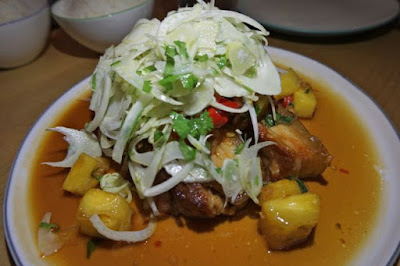 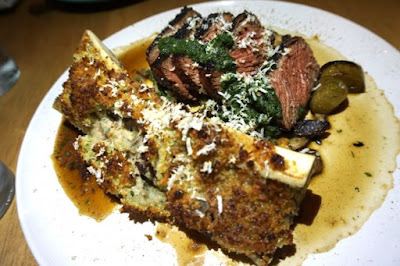 Stuff dreams are made of: a dish of shortribs with escargot-filled bone marrow, mushrooms, spring onions and horseradish ($36). 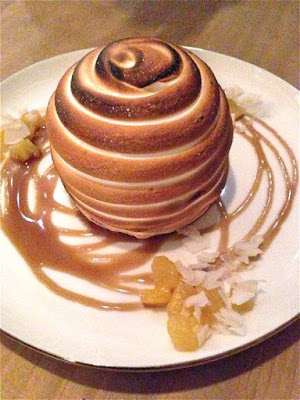 For dessert, Baked Hawaii caramelized pineapple ice cream ($10) is Kapur’s 50th state nod to Baked Alaska. The ice cream is encased in beehive-shape meringue and torched before it arrives at the table, lighting up eyes in the process.

Lastly, before leaving San Francisco, I leave you with one more quickie dessert option, this time at Smitten Ice Cream near the Rockridge BART station in Oakland. At Smitten, liquid nitrogen provides a minus 321 degrees Fahrenheit chill to freeze your ice cream on the spot. It’s 90 seconds from placing your order to heaven.


Non-flash video
—————
Nadine Kam is Style Editor and staff restaurant critic at the Honolulu Star-Advertiser; her coverage is in print on Wednesdays and Thursdays. Contact her via email at nkam@staradvertiser.com and follow her on Twitter, Instagram and Rebel Mouse.
Posted by Nadine Kam at 8:42 PM