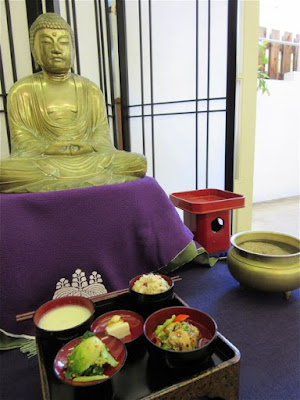 Nadine Kam photos
Before anyone else is served, the Buddha receives the first offering of vegan cuisine from Satori Hawaii.

Some people achieve nirvana, described as a state of bliss or peace, through meditation. Others find it through music, or food.

The latter group might want to head to Soto Mission of Hawaii, at 1708 Nuuanu Ave., where Satori Hawaii offers Shojin Ryori, or contemporary Buddhist cuisine, for lunchtime bliss from noon to 2 p.m. Saturdays.

If you think your parents had a lot of rules for the table, imagine the life of a Buddhist monk.

It all started with Buddha’s dilemma over eating vs. the sanctity of life. He taught peace and compassion, so was troubled that sustaining our own lives comes at the cost of ending the precious lives of animals and plants. 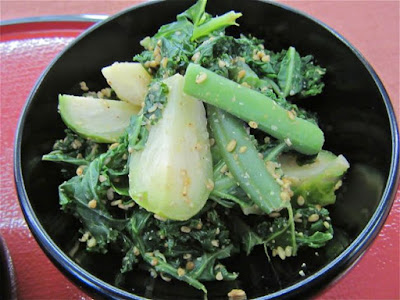 So Buddha took a serious view of eating, adopting a philosophy and rituals for cooking food in order to make the most of fresh seasonal ingredients, their preparation and the manner of receiving it.

At that time, those who wished to enjoy Odin’s food worked their way up to mealtime with a lengthy and elaborate zazen, or seated, guided meditation session.

After that, we were released into the mission’s social hall for what my friends and I believed would be a vegan meal in a typically social session.

Instead, diners were seated about 6 feet apart, with no one seated across from us for a traditional Zen meal taken in silence, so as to concentrate all focus and energy into the bowls of food set before us on a beautiful lacquer tray.

I laughed on the inside as I heard two of my friends being chided for their quick eating habits, rapidly pecking at each bowl’s contents with their chopsticks.

“No,” said the monk, who proceeded to introduce all to the etiquette of picking up only one bowl at a time, appreciating its contents and all the preparation and labor that brought it before your eyes, before partaking. When you have eaten a few bites, or all of its contents, you must set down the bowl and follow the same protocol with each of the five to six bowls in front of you.

The ritual is intended to foster a sense of gratitude for the source and blessing of receiving such a meal, and asking yourself whether you are even worthy of this food. All these things most of us take for granted because of the repetitive, somewhat tedious nature of feeding ourselves every day.

Today, you can simply enjoy the Saturday lunch-time meal without the meditation and with full-volume socializing, although Odin hopes people will take to heart her message of bringing balance, harmony and simplicity to life by starting with the food we eat.

Her food is vegan and gluten-free, made without onions or garlic and minimal condiments in order to maximize nutrition and the natural flavor of produce used. She was inspired to expand the vegan community in Hawaii after moving here seven years ago and finding no vegan restaurants here. Her aim is to eventually open a vegan cafe or noodle shop, which can’t happen soon enough for her fans.

Diners on a recent Saturday had varied familiarity with vegan and Buddhist cuisine, from Karen Wong, a first timer referred by her physician Dr. Lorrin Lau, who was also there, and several members of the Vegetarian Society of Hawaii. All loved the food. 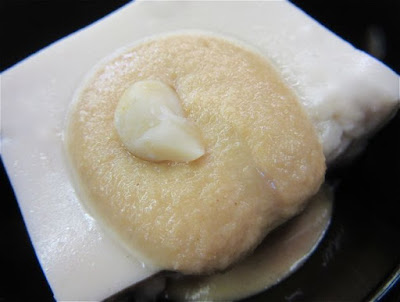 “When I went to Japan, this is how they ate,” Lau said. “Very artistic, very colorful. No meat, no dairy. You can have as many helpings as you want and you won’t gain weight.”

VSH president Lorraine Sakaguchi, said she made the transition to a vegan diet over a 23-year period, saying, “I did it for health at first, realizing along the way that we don’t need to eat any animal protein for health.

“I felt so much better and started volunteering with the vegetarian society. I had so much energy I wanted to help people feel better,” she said. “A lot of people in this state and elsewhere getting unnecessarily ill, and a lot has to do with diet.” 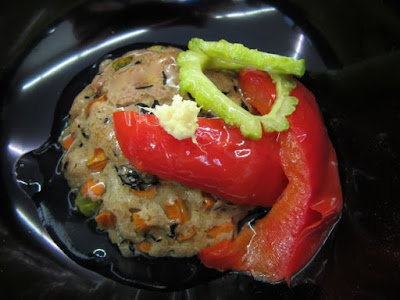 “Ganmodoke” refers to a deep-fried tofu fritter, but Satori Hawaii’s version is baked with a crunchy texture derived from diced veggies in the mix.
———
Nadine Kam is Style Editor and staff restaurant critic at the Honolulu Star-Advertiser; her coverage is in print on Wednesdays and Thursdays. Contact her via email at nkam@staradvertiser.com and follow her on Twitter, Instagram and Rebel Mouse.
Posted by Nadine Kam at 6:25 PM