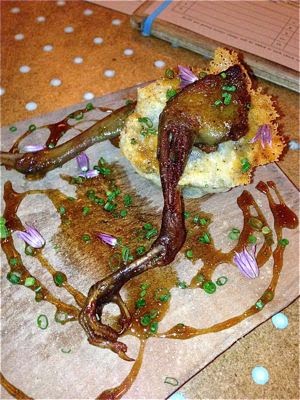 SAN FRANCISCO — Travel is a great barometer as to where Hawaii stands in the culinary scene, and while the food in our state has improved greatly over the past two decades, there's no such thing as resting on laurels because excellence is a moving target.

I was in the San Francisco area, meeting up with relatives in Fremont for a wedding, so only had one night in the city for dinner and my options were Nopa or State Bird Provisions. Being a bit of a weirdo, I couldn't resist the audacity of the latter, which began life with the premise of serving up the state bird, the California quail, symbolic of hardiness and adaptability.

Now that's something you wouldn't see in Hawaii with the endangered nene!

I'm not that keen about eating small birds that are more bones than meat, so thankfully, the restaurant's chef-proprietors Stuart Brioza and Nicole Krasinski moved on to other local, organic and well-crafted ingredients.

And yet ... the restaurant is known for its savory pancakes, so I ordered the confit squab short stack with maple vinegar and candy cap powder, and it was more than enough to change my mind about the appeal of small birds. It was only after polishing off the thigh that I looked down and realized they were still attached to the bird's gnarled claws!

That's the other thing about this place. I had to inhale my meal. As the nation's Best New Restaurant 2013, as deemed by the James Beard Awards committee, it's one of the Holy Grails of restaurants and therefore, I was told, impossible to get into. People must log onto the restaurant's website precisely at midnight 60 days before their desired reservation date to get a seat. 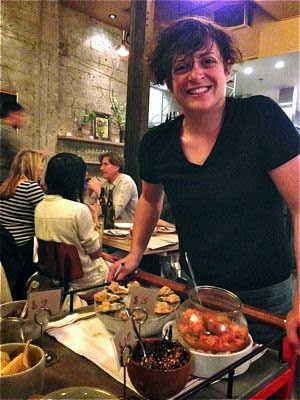 Order off the menu or dim sum style, off carts and trays bearing many tempting delicacies, from single oysters and up. I really wanted the halibut and avocado atop a nori cracker, but I had to eat and run.

But, parsing the words on the restaurant's website, I learned that they do save room for walk-ins on a first-come basis, and I've never had trouble getting into popular restaurants. It helps to show up early as a single or couple, and be willing to dine at the bar.

The trouble came when a 15-minute rest turned into a three-hour snooze and I missed the 5:30 p.m. opening time. I got there at 6:30 and spotted a single opening at the bar, but they said that was spoken for. They did have a two-top available, but that meant eating and running in 45 minutes when the reserved party was due to arrive. Done!

Having got in, I thought that was easy enough, but later I was told walk-ins regularly wait in line two hours to get in.

If you're curious as to what goes into a restaurant worthy of being called the nation's best, great food is a given. Here, it's casual, and I would say not much different from dozens of great restaurants across the nation. But, restaurateurs also have to get the attention of jaded food writers who have "seen it all."

State Bird Provisions wins points with memorable service, delivering contemporary American cuisine dim sum style. Order off the menu to start, but don't pick up enough for your entire meal. It's worth waiting for waiters to appear with trays or pushing carts provisioned with amazing appetizers and ingredients starting at $2. The small plates command attention and there's nothing froufrou or "arranged" about them. The hearty ingredients are filling and I still marvel about the simple, delicious elegance of a salad of hearts of palm, avocado, yuba and tahini.

I started with three dishes, and it was hard to pass up smoked trout and avocado dip served with chips. Unfortunately, with time flying by, I didn't have time to try the nori cracker topped with halibut and avocado, king salmon tartare with fermented turnips, or pork belly-blood orange salad. Maybe next time I'll make a real reservation.
—————
State Bird Provisions is in the Western Addition at 1529 Fillmore St., San Francisco. Open
5:30 to 10 p.m. Sundays to Thursdays, and 5:30 to 11 p.m. Fridays and Saturdays.
Call 415.795.1272. 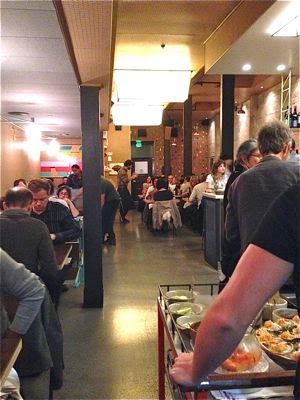 In addition to table seating, a bar on the right side of the restaurant overlooks the food prep. 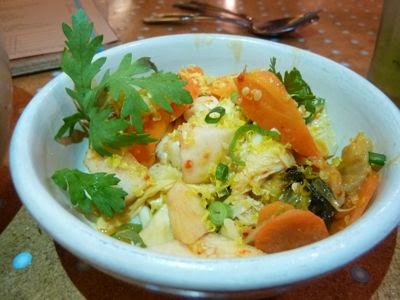 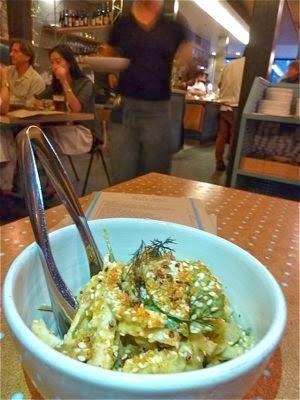 Hearts of palm salad with avocado, pomelo and tahini-chili oil, $13. I rarely take food to go when I'm traveling, because there's always an abundance of restaurants to try, but this was worth doggie-bagging and it was just as delicious the morning after. 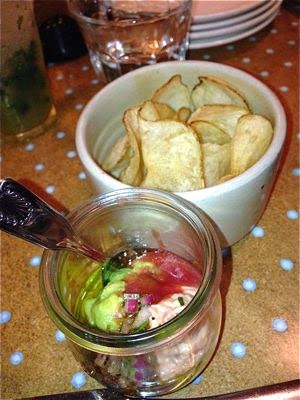 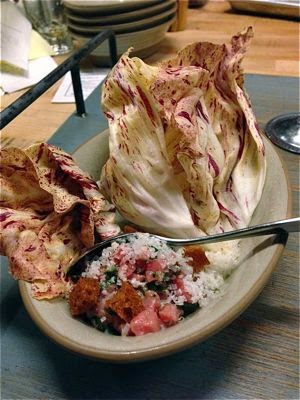 On my way out of the restaurant, I passed this artichoke, quinoa and chickpea tabouleh on a tray awaiting delivery. Alas, I had no time to enjoy dessert either.