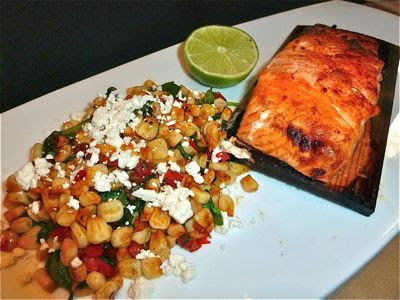 California Pizza Kitchen launched its New Advenuture menu items with a tasting of dishes at its Kalakaua Avenue location, focused on healthful dishes inspired by global cuisine. It's quite a feat to offer up dishes that embrace the best of two worlds: healthful and delicious.

The two don't often go together in the restaurant world. I was discussing with friends how I cook at home with very little salt and fat, so it's how I find balance from all the restaurant meals I ingest. I applaud CPK's effort to address appetites of those who want to eat more healthfully without feeling they're making any kind of sacrifice.

One of the best examples is the guilt-free, fire-roasted chile relleno, which does away with the deep-fried breading and heavy cheese. Yet, it's more flavorful than ever with the poblano pepper stuffed with a combination of diced chicken, eggplant, cheese, corn and black bean salsa, mushrooms and spinach, then topped with avocado salsa verde and cilantro. It's currently $12.10, and I would not have guessed that it was the a low-calorie dish, at 380 calories. They had divided the pepper below into thirds for tasting portions, and I was feeling a little bad about having two helpings. I didn't feel quite as bad when I found out that added up to a mere 250 or so calories.

On the other hand, I was surprised to find a deceptively simple salad of quinoa + arugula ($10.30) had nearly as many calories, at 610, as a platter of cedar plank salmon ($18.60) served with white corn and spinach succotash and crumbled feta, at 640.

The salad ingredients seemed harmless: feta, sun-dried tomatoes, red onion, toasted pine nuts and asparagus, so no doubt it was the light champagne vinaigrette that added calorie-dense oil to the mix. This is how people misjudge the calories in food. It looked like the lightest offering at the table. 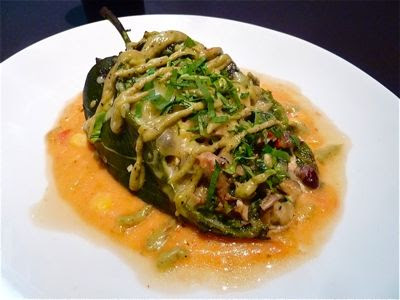 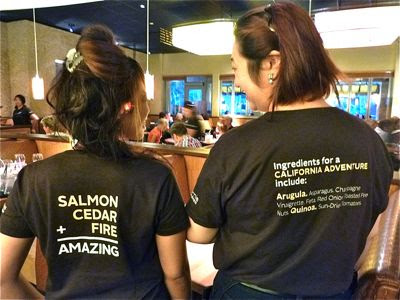 Servers wore T-shirts to mark the occasion. On the right, the T-shirt described all the ingredients in a quinoa + arugula salad ($10.30). 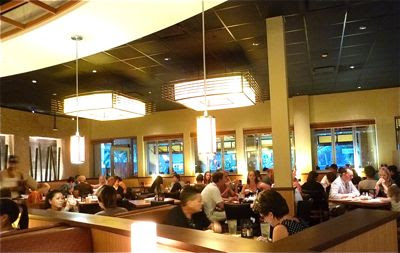 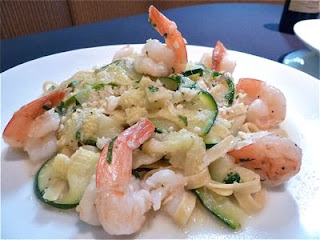 Shrimp scampi zucchini fettuccine, 550 calories, with lemon, garlic, white wine and parsley, without the butter. I liked it, but if I were ordering again on my own, I'd probably opt for the chile relleno or salmon. The shrimp and zucchini were great, but fettuccine didn't pick up enough flavor. 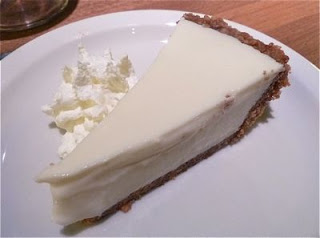 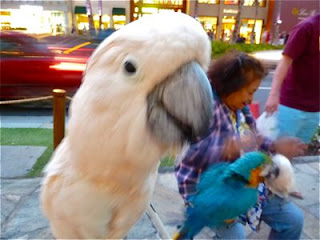 Step outside to the color of Waikiki and Kalakaua Avenue. The photo's blurry because this cockatoo was moving right up to the lens and I didn't want my finger taken off. It's owner assured me cockatoos and blue-gold macaws are friendly and told me I'm only afraid because the two birds I do have, a sun conure and African gray, are the most ornery of the bird kingdom. "It's their nature (to want to take your finger off)," she said.
Posted by Nadine Kam at 5:53 PM