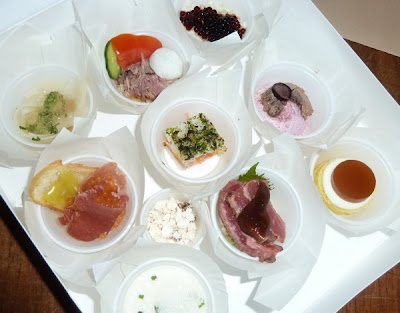 Nadine Kam photos
The Honolulu Academy of Arts and EAT Honolulu presented an “El Bulli” Bento during a food and film pairing to mark the screening of the documentary “El Bulli: Cooking in Progress,” capturing the work that went on in Ferran Adrià’s famed restaurant before he shut it down last month. A map below describes the dishes.

In the spirit of Spanish chef Ferran Adrià’s revolutionary restaurant El Bulli, those who attended the screening of the documentary “El Bulli: Cooking in Progress”Aug. 27 at the Doris Duke Theatre at the Honolulu Academy of Arts had the option of partaking in a food and wine pairing featuring the molecular gastronomy techniques that brought Adrià international renown.

It’s always interesting to taste food prepared in new ways, such as tzatziki delivered in sphere form to accompany a lamb gyro, and a Kahuku corn panna cotta accompanied by bacon crumbs and Parmesan “air.” 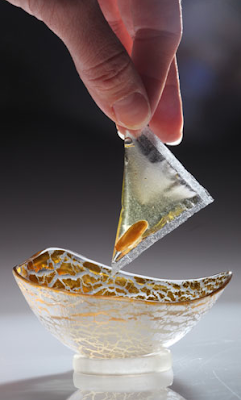 Although the merging of science and culinary art is what brought the restaurant international attention since 1987, the film shed light on Adrià’s process, that begins with shuttering his restaurant half the year so that he and his staff can devote their hours to experimentation.

Their work space looks more like a science lab than kitchen. It is as if they are willing to go back to infancy and abandon all the technique cataloged in Larousse Gastronomique, and all their knowledge of ingredients, to relearn everything from scratch. Each ingredient is chopped, dissected and examined anew, as if they had never been seen, tasted or used it before. Therefore they are able to appreciate that, when separated, the gills of mushrooms resemble individual leaves.

Led by chef de cuisine Oriol Castro, ingredients are then boiled, baked, sauteed, fried, pressure-cooked, etc., with oil, without, with water only, etc., to determine the best ways to coax out their flavor, and to develop alternative forms—liquids, gels, foam, air and spheres—of serving them. 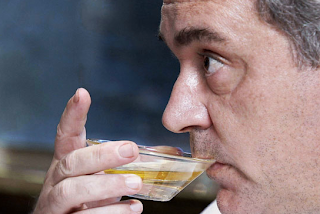 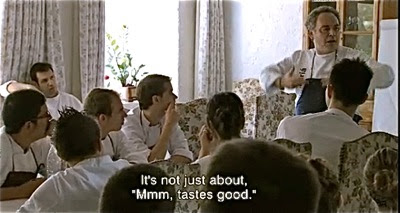 The trailer: Like art, the El Bulli experience transcends food to create an experience that evokes emotional response.

Deconstruction was one aspect of the kitchen’s work, and one that Adrià—determined to never repeat himself—had abandoned by the time the documentarians arrived. The key theme of the meal in progess in the film is water, and at one point, Adrià marveled at the irony of guests relaying their once-in-lifetime dining experience to friends by telling them, “I went to El Bulli and had water.”

Each step in the process is carefully documented and photographed, and assigned stars. Adriá sniffs and tastes his staff’s work, and by the time the crew reassembles in the restaurant, the menu is still a work in progress, but somehow, a theme arises, and the dishes—a merging of the best of flavors and techniques arising from the six months of experimentation—begin to take form.

The meal and movie added up to a perfect marriage and I regret never having made it to Spain to experience firsthand the work of the man who reshaped the way we think about food in the 21st century.
————
EAT Catering & Café is planning a fall equinox El Bulli-inspired 24-course menu in late September. 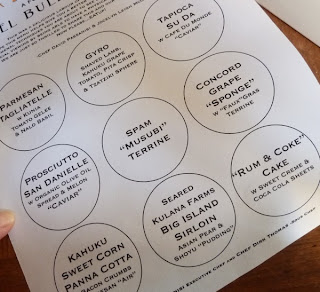 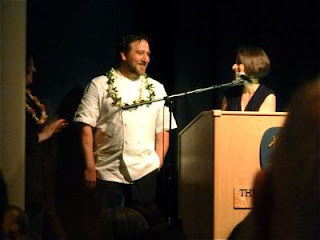 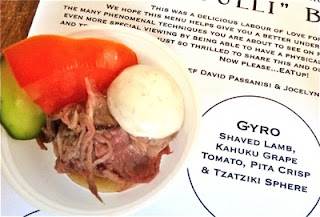 The tzatziki sphere was a novel accompaniment to a mini gyro. 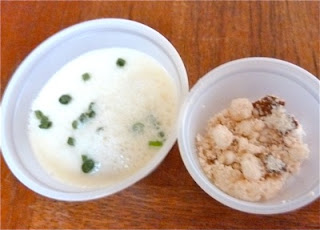 I liked the Kahuku corn panna cotta, left, but the Parmesan air, not so much. 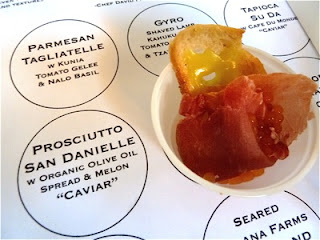 You can spot the pearls of melon caviar under the proscuitto.
Posted by Nadine Kam at 7:51 PM