JAMM AQUINO / JAQUINO@STARADVERTISER.COM
The lunchtime crowd is reflected in a mirror at Peace Cafe in Moiliili.

Ask and ye shall receive. I've long bemoaned the dearth of vegetarian restaurants in Honolulu. All of a sudden we have two new options, both opened over summer.
Question is, Can they convince a mostly meat-eating public to take a nibble when vegetarian, vegan and macrobiotic dining are more frequently associated with deprivation than joy?

Hawaii lags other major cities, where healthy options abound and cohabit with more typical fare at small corner restaurants and even fast-food outlets.
Here, eating healthy takes work and planning, too much for most people, who still need to be convinced that vegetables can be sexy-delicious and not just something added to one's plate when health issues demand a lifestyle and diet overhaul.
I've been to major restaurants from Vancouver, British Columbia, to Las Vegas that serve daily prix fixe vegetarian meals, and they've been experiences to remember. Contrast that with a typical local experience: A few years ago I saw another foodie eating at a vegetarian restaurant and days later asked her when she was going back. She said, "Once is enough."
Maybe these two will convince diners to return for more.

Opened in May near Old Stadium Park, Peace Cafe specializes in vegan sandwiches, salads and desserts. It's a start.

The hole-in-the-wall's owner, Megumi Yamaki, grew up in Japan eating traditional meals that were big on fish and fresh vegetables, with a minimum of meat.
She'd traveled to Hawaii several times before finally making a move here about two years ago, and what she saw of plate lunches caused her to worry about the health of local people. She'd read about the high incidence of diabetes here and believed an unhealthful diet was the root of many health problems. Through an interpreter and the cafe's baker, Ari Moriya, she said it became her mission to offer healthful options.
Yamaki said she knows how hard it is to find healthful food in Hawaii. She adopted the vegan diet a decade ago and has a hard time finding restaurants where she can eat. She operated a small kiosk, Ka Liko Terrace, outside Palama Market-Makaloa, before making the move to larger quarters.
So far, sandwiches dominate the menu and are the most accessible to the nonvegan. There's nothing mysterious about the likes of an avocado-veggie sandwich ($8.10) that could use more avocado, Popeye sandwich ($8.10) of spinach and tofu dressed with miso-tahini (sesame) or a curry eggless sandwich ($8.25) in which the yellow curry flavor masks the substitution of tofu for the egg. All the sandwiches are built on soft, chewy ciabatta made specially for the restaurant by Ba-Le and are piled high with organic veggies: cucumbers, tomatoes and sprouts.
Also worth trying is a healthy version of the Caesar salad ($8.45), topped here with a cashew cream dressing with a delicate crunch.
The Peace Box ($8.50) is popular, but I'm not a fan of this sort of soy protein masquerading as meat, when vegetables and tofu should be accepted as satisfying in their own right. In this case, the too-salty teriyaki-style soy protein sits on brown rice and mimics ground beef, but it's no match in flavor or texture.
Moroccan stew ($8.45) also could be punched up with more vegetables, such as eggplant and bell pepper, instead of chickpeas alone. The flavor is good, but texturally, spoonful after spoonful of chickpeas can be monotonous.
Peace Cafe's selections of sweets can be your reward for making a healthful attempt. Moriya, who went vegan five years ago, worked for Yamaki at Ka Liko Terrace and now bakes all the cafe's desserts.
Diners will find themselves sated even though refined sugars have been replaced by maple syrup, apple juice or agave, and white flour has been replaced by more healthful whole wheat.
Moriya said she started baking 10 years ago as a hobby, creating Martha Stewart-style confections, but loves eating sweets too much to continue on that rich track. Her aim is now to create desserts that are "not too sweet, not too oily, that you can eat every day."
These include the likes of matcha green tea or apple cinnamon mochi cakes ($2 to $2.25), kinako cookies ($2.15 for two pieces), mini muffins ($1.50) and bread pudding ($2.99). 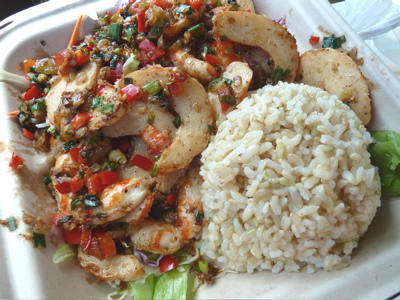 Loving Hut is part of an international vegan fast-food chain, each family owned, with menus unique to their communities, so there's nothing "processed" about the food served here.
Vietnamese cooking, already high on vegetarian ingredients and palate- wakening flavors, is a natural for adding to a vegan menu, and Loving Hut offers a superb example of what can be done without a trace of meat or meat products.
As much as I'm usually against the idea of mock meat, here there is mock shrimp made from yam root, realistic to the point of having the orange bands associated with cooked shrimp.
I was studying the photos of the "shrimp" online before venturing into the restaurant and was skeptical about how it might taste, but it had the sweetness and bouncy texture similar to fishcake, which, combined with the flavors of soy, garlic and green onions, made a dish of Spicy Moana ($8.50) seem just like a shrimp stir-fry.
The mock shrimp also worked in a plainer dish of two summer rolls ($3.50), wrapped with vegetarian ham, tofu, rice noodles and veggies. And the mock shrimp turns up again in a dish of "Island Jewel," a stir-fry also featuring broccoli and onions.
Soy protein substitutes for meat in a dish of Fabulous Pho ($7.95), but because all the other typical pho ingredients are included, it won't seem much different from the noodle soups served at other Vietnamese restaurants. Only a few will be distracted by the oily, sweet broth. The pho is served with plenty of bean sprouts, basil and rice noodles, with the addition of gluten and mushrooms for heft. 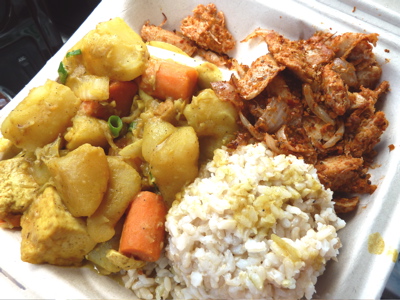 Loving Hut's Guru Curry.
Lemongrass Hawaiiana ($7.95) is there for those who might normally order lemongrass chicken, pork or beef. Here, the lemony herb, peppers and spices coat soy protein sliced to resemble chicken or pork.
Other dishes are eggplant tofu ($7.95) and "Guru Curry" ($7.95) of potatoes, tofu, taro, carrots and onions in a yellow coconut-curry sauce.
A two-entree plate is $7.25, or a three-entree plate is $8.25, allowing you to sample as many dishes as possible in one sitting. Even so, I think this one will have nonvegans craving many a return trip.
Even better, it could be a template for what a meatless future could be. I'm still waiting for someone to offer more diversity and more greens/beans/nuts than processed soy proteins, but it'll take a much larger operation and commitment.
Posted by Nadine Kam at 1:30 AM